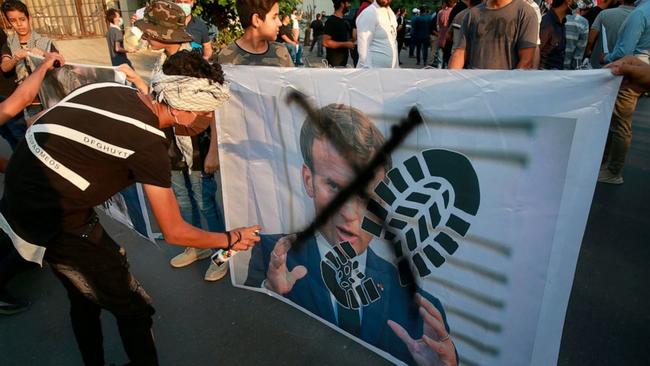 
Turkey’s President Recep Tayyip Erdoğan has done his best to stoke religious tensions related to Charlie Hebdo cartoons which mock Islam’s founder Muhammad, especially after recent terror attacks in France were condemned by Macron as “Islamist terrorism”. Macron had further said Islam is “in crisis” after clearly Islamic-inspired killings have left multiple people dead and wounded this month – the latest being the shooting of a Greek Orthodox priest in Lyon who was left with life-threatening injuries.

Earlier this week Erdogan likened it to Europe wanting to “relaunch the crusades” and that hatred of Islam is “spreading like a cancer”. He had told his ruling Justice and Development (AK) Party’s parliamentary group: “Unfortunately, we are going through a period in which the hostility towards Islam, Muslims and disrespect to the Prophet Muhammad is spreading like cancer, especially among the leaders in Europe,” according to Turkish media.

Mass protests popped up across capitals in the Middle East from Pakistan to Afghanistan to Lebanon, often in front of the local French embassy.

Unrest was especially seen in Jerusalem and the Gaza Strip on Friday after an influential cleric who heads to Palestinian Islamic Supreme Council, Sheikh Ikrima Sabri, earlier called for a “day of rage” against France and Europe’s “attempts to harm” the prophet Muhammad.

The cleric is a main preacher at al-Aqsa Mosque and told followers to “reject the offensive drawings of the Prophet Muhammad” and further to “express their rejection of these uncivilized transgressions.” He said the “offensive cartoons contradict freedom of speech and expression” and are intended to ridicule and insult Islam.

On Friday there were clashes with police in Jerusalem, but the protests don’t appear to have spread as widely throughout Palestinian territories as was intended. The Associated Press detailed the “day of rage” as follows:

Hundreds of Palestinians also protested against Macron outside the Al-Aqsa Mosque in Jerusalem, the third holiest site in Islam, chanting, “With our souls and with our blood we sacrifice for our prophet, Muhammad.” Some youths scuffled with Israeli police as they exited the esplanade into the Old City. Israeli police said they dispersed the gathering and detained three people.

Scores more turned out in the Gaza Strip, where the militant Hamas group organized anti-France rallies at mosques across the territory that it controls.

Fathi Hammad, a Hamas official, addressed a demonstration at the Jabaliya refugee camp, vowing “to stand together to confront this criminal offensive that harms the faith of about two billion Muslims,” referring to depictions of the Muslim prophet. He reiterated Hamas authorities’ appeal for Palestinians to boycott all French products.

Meanwhile France continues to be in a high state of alert, with security forces on the lookout for more terror attacks amid the tension which seem a repeat of the 2015 Charlie Hebdo massacre.

The government has also issued a travel advisory for French citizens abroad, warning them of the potential for random retribution attacks.