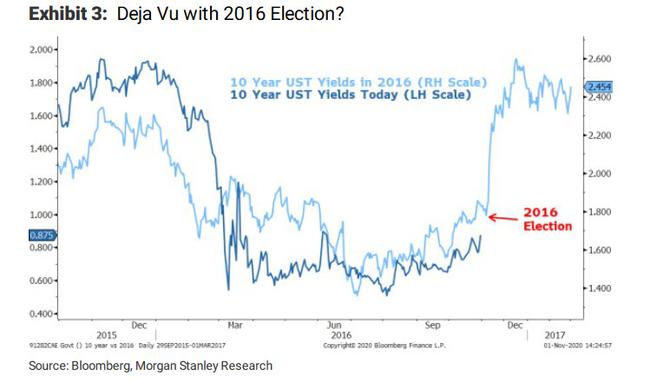 
Just over a month after warning to “brace for a very difficult trading environment over the next five weeks” and two weeks after he (correctly) predicted that US stocks were due for their second 10% correction in as many months as “investors were a bit too complacent on the uncertainty surrounding the election outcome, unlikely passage of a fiscal stimulus before the election and second wave of Covid-19”, the S&P 500 has indeed fallen 9% while the Nasdaq and Russell 2000 have fallen 10% and 7%, respectively.

So does that mean the correction is over?

That’s the question Wilson asks in his latest note to clients, and answers that “the short answer is that the worst of the correction is over in our view but we still think the next month is likely to remain volatile and uncertain as we navigate what is shaping up to be a much closer election than expected just a few weeks ago and risk of further lockdowns as the virus runs its course.”

As the strategist explains, a key part of his bearish call was based on the view that the equity risk premium should have a larger buffer built in given these very visible risks/events. Fast forward to today and that’s exactly what’s happened, with the Equity Risk Premium widening by approximately 30 bps to 405 bps from the 375 bps level when he made his first call. At the same time, with interest rates remaining steady rather than falling as they typically do when equity markets sell off, the P/E has compressed by approximately 10%. Putting it all together, Wilson suggested a 50bps buffer to where ERP should trade based on realized vol would be appropriate going into the election.

Well, at the end of last week, the ERP buffer was approximately 40bps which is quite close to his +50bps target (indicatively, a further widening of 10 bps would take the S&P 500 down another 2% which lines up more closely with the bank’s stated technical support at the 200 day moving average, or 3130).

The bottom line for Wilson is that “the correction we expected is now mostly finished and adding to equities on further weakness this week is recommended.”

So is it smooth sailing ahead?

Well, while Wilson says he is comfortable telling clients to add risk into further weakness this week or even near current prices, he also believe “it could take some time for the S&P 500 to resume its bull trend in earnest. In other words, equity markets will need to sort out the impact from the election outcome, a second wave of the virus and potential for further lockdowns and perhaps most importantly, higher back end interest rates” (more on that shortly). In a nutshell, Morgan Stanley recommends buying stocks that are likely to have the greatest positive revisions to 2021 earnings estimates, and not those relying on further multiple expansion.

Here a quick tangent on the implications of the election.

Wilson writes that while in isolation, a closer election shouldn’t be a bad thing for equity market valuations, “in a year when more voters are doing so by mail, it could mean the results are delayed or even challenged by the losing side.” This goes for Congressional elections as much as who will be in the White House. What that means is uncertainty, and that usually comes with higher, not lower equity risk premiums. Add to that the arrival of the second wave of COVID-19 without additional fiscal stimulus coming and as Wilson hedges, “one could argue the buffer on Equity Risk Premium is still too skinny.” In any case, and as discussed above, at 405bps in the ERP, “it makes sense to start adding to your favorite stocks again.”

But there is one giant flashing red light: the risk of surging yields. Recall that a month ago, Goldman first predicted that yields would spike by 50bps in case of a Blue Sweep. Well, to Morgan Stanley that number is too low by half.

As Wilson explains, the other component to a Price/Earnings ratio is 10 year yields and here the MS strategist argues that “evidence is starting to mount that our call for much higher rates is going to be right” and the greatest evidence is the fact that as stocks were correcting 10 percent over the past few weeks, 10 year yields are actually up 10 bps in what has been a vary painful shock to 60/40 and risk parity funds.

If that weren’t enough, the yield is now poking its head above its 200 day moving average for the first time in almost 2 years.

As Wilson stated one month ago when he first touched on the possibility of a “rate scare”, this set up looks very similar to 2016 on so many levels except with greater magnitude. After the election in 2016, 10 year yields move higher by 120bps in a few short weeks. So “could we be looking at a repeat this time around” Wilson asks and answers: yes.

So going back to the biggest wildcard in Morgan Stanley’s forecast – and this should be taken seriously because unlike his pals at Goldman and JPM, Michael Wilson tends to be rather spot on in his predictions – he thinks “10 year yields are about to rise significantly and a 100 bps move cannot beruled out. In fact, we think it should be expected.”

Needless to say, given the “long duration” nature of the S&P 500’s star performers, where tech stocks are effectively a bet on deflation and duration, such a sharp adjustment would have a dire impact on risk assets, with even Wilson admitting that it will “have a net negative impact on P/Es initially as the equity risk premium won’t fall fast enough to fully offset such a rise in rates.”

Such an adjustment should be most painful for those companies with the highest multiples (i.e., very expensive growth stocks such as the FAAMGs) and those companies whose earnings are most negatively correlated to higher rates (defensives). Conversely, the damage should be least on lower P/E companies and those that benefit from higher rates (financials and cyclicals), and may explain why today we saw a selloff in tech coupled with a surge in small caps, cyclicals and energy names.

Summarizing Wilson’s reco: “add to stocks this week but keep a bias toward those stocks that are more fairly priced should a big rate rise occur” with the driver of the next leg in this bull market likely to be earnings, not mlutiples/valuations which will need to adjust drastically lower for higher rates.