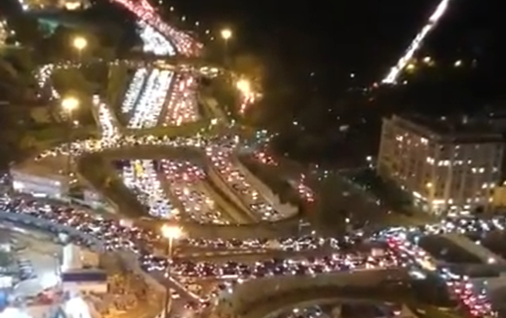 
Viral footage out of France shows what reports described as hundreds of miles of traffic jams in an around the French capital at the close of this week just as a Macron-mandated second national lockdown went into effect Friday.

The new lockdown measure took effect Friday at midnight with a 9pm curfew, which requires all residents to stay at home other than for essential work or medical reasons. It appears that hours before the lockdown went active, Parisians rushed to get out of the city, as one viral video showed. The stay-at-home orders have been issued to be in effect for one month – at least until December 1.

Incredible traffic jam in Paris as people try to leave the city before 9 pm curfew and before confinement begins at midnight. Traffic is barely moving in every direction as far as the eye can see. Lots of honking and frustrated drivers. pic.twitter.com/6Zn2HCxuPl

French media described the traffic jams as record-breaking, a trend also observed in other major cities such as Lyon and Bordeaux.

Here’s how The Independent summarized the chaotic situation late Thursday into Friday:

As of midnight Parisian time, people were ordered to stay at home except for essential work or medical reasons, resulting in many relocating to more rural areas to wait out the month-long lockdown, the BBC reported.

Video posted to Twitter showed never-ending streams of crawling headlights on every road in every direction. There also were reports of restaurants jammed with diners enjoying a last meal out for the time being.

It was also likely exacerbated by many people simultaneously attempting to return to their residences given this week is a school holiday that ends with Catholic All Saints Day on Sunday.

Restaurants, bars, and night venues were also reported packed and overflowing as many Parisians tried to slip in their last night out for a month.

Macron in making the initial announcement Wednesday said France must “brutally apply the brakes” to avoid being “submerged by the acceleration of the epidemic”. France is currently the fifth most infected country at over 1.3 million COVID-19 cases to date.

#Coronavirus: Paris has seen hundreds of miles of traffic jams as people tried to leave the city ahead of France’s new national lockdown https://t.co/wdZ7dH2Nee

Multiple reports cited local Le Parisien as reporting that “there was more than 430 miles (700km) of gridlock traffic in the city by 6pm.”