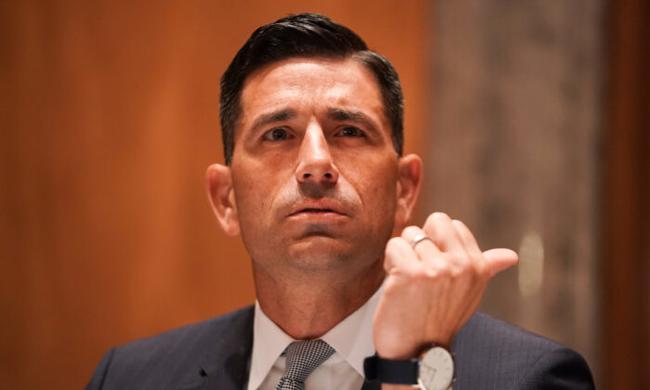 Twitter suspended Morgan’s account on Oct. 28 after he posted updates about the U.S.-Mexico border wall. The company reinstated the account 20 hours later on Oct. 29. In a letter addressed to Dorsey on Friday (pdf), Wolf said that Twitter’s recent action was “disturbing” and called the company’s censorship a national security threat.

“As the Department of Homeland Security and other federal agencies continue to rely on Twitter to share important information with the U.S. public, your censorship poses a threat to our security,” he wrote.

The Twitter by Morgan on Oct. 28 had a video of the progress of the wall along with the message: “CBP & U.S. Army Corps of Engineers continue to build new wall every day. Every mile helps us stop gang members, murderers, sexual predators, and drugs from entering our country. It’s a fact, walls work.”

Twitter’s moderators removed the tweet from public view and emailed Morgan, saying, “You may not promote violence against, threaten, or harass other people on the basis of race, ethnicity, national origin, sexual orientation, gender, gender identity, religious affiliation, age, disability, or serious disease.”

“The acting commissioner’s tweet did none of these things. Read it. Watch the video,” Wolf told Dorsey in the letter. He also called Twitter’s action “unjustified,” adding that “the tweet is supported by data.”

“Whether you know it or not, CBP guards the front line of the American homeland. CBP repels and arrests thousands of violent criminal gang members each year. CBP rescues young girls who are forced into cross-border sex trafficking. CBP intercepts dangerous drugs and contraband, including enough of the opioid fentanyl to kill every man, woman, and child in the United States several times over,” Wolf asserted. “CBP fulfills the United States’ most obvious and essential law enforcement and national security responsibility to the people of our country. Your company may choose to be ignorant of these facts, but it is no less censorship when you choose to suppress them.”

“There was no reason to remove Mr. Morgan’s tweet from your platform, other than ideological disagreement with the speaker,” he added.

“Such censorship is disturbing.”

Morgan’s suspension came on the same day that Dorsey and other big tech CEOs faced questioning during a Senate hearing to discuss reforming Section 230 of the Communications Decency Act. Section 230 shields tech companies from liability for content posted on their platforms while letting them moderate content, including on political discourse.

Republican lawmakers used most of their time during the hearing to accuse the companies of selective censorship, while Democrats primarily focused on insufficient action against so-called misinformation that they said interferes with the election.

Both Wolf and Morgan traveled to the border in Texas on the following day, Oct. 29, to announce the nearly 400 miles of border wall system built under the Trump administration.

“Only after CBP reached out to Twitter’s office of government affairs a second time and went public with this censorship, then finally Twitter admitted its bad judgment and unlocked the account,” Wolf wrote.

“I call on you to commit to never again censoring content on your platform and obstructing Americans’ unalienable right to communicate with each other and with their government and its officials, including the thousands of law enforcement officers at the DHS who work vigilantly and diligently to protect your safety every day,” he wrote.

Prior to his account being reinstated, Morgan told The Epoch Times that his suspension was “unbelievable.”

“Twitter is out of control in their clear bias against this administration and their blatant censorship of anything that may go against the policies of those who sit in cubicles in Silicon Valley,” he followed up in a statement.