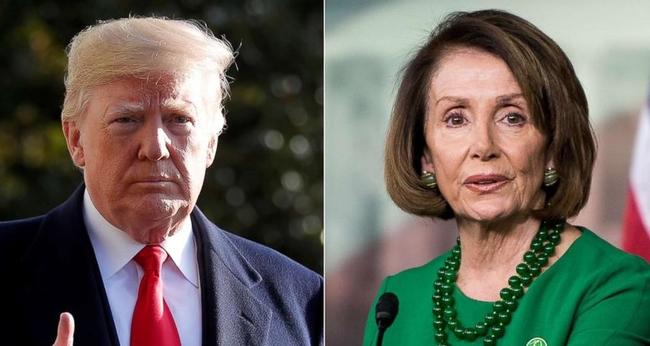 
After coming under fire from her own party for rejecting a $1.5 trillion ‘moderate’ bipartisan stimulus deal supported by 50 House lawmakers, Speaker Nancy Pelosi (D-CA) was seemingly thrown a lifeline Wednesday thanks to a tweet from President Trump urging GOP lawmakers to “Go for the much higher numbers” amid stalled coronavirus negotiations.

Democrats are “heartless”. They don’t want to give STIMULUS PAYMENTS to people who desperately need the money, and whose fault it was NOT that the plague came in from China. Go for the much higher numbers, Republicans, it all comes back to the USA anyway (one way or another!).

Trump followed up at a White House press conference, saying he liked “the larger numbers” contained in the $1.5 trillion plan, saying “I agree with a lot of it.”

Regardless, Pelosi is digging her heels in at $2.2 trillion, while Republican leaders who say that’s far too high proposed a substantially smaller, $650 billion “skinny” package last week.

Pelosi’s rejection of the subsequent $1.5 trillion bipartisan compromise supported by 50 members of her chamber – leading to a rare public rebuke from rank-and-file Democrats.

It was a rare wave of on-the-record discontent with PELOSI, who typically rules her caucus with an iron fist. With talks on ice and Congress on the brink of leaving town, her leadership team started to mull whether they should schedule a series of votes to quell the uprising.

Then, Trump fired off his Wednesday tweet urging Republicans to consider a larger package, taking the heat off Pelosi – who conflated Trump’s support of the $1.5 trillion plan with support of her plan in a Wednesday joint statement with Senate Minority Leader Chuck Schumer (D-NY) which pitted Trump’s comments against Senate Republicans, who they say are “shortchanging” the American people.

According to Politico‘s Jake Sherman, attention began to shift back to Pelosi on Wednesday evening, with some GOP considering forcing a “quixotic vote” on removing Pelosi from the speakership – a symbolic move which would be sure to fail.

It’s a measure that would be sure to fail. But it would serve to unify House Democrats around the speaker in the middle of the pandemic. Democrats were already asking: Who is thinking about stuff like this when thousands of Americans are dying?

White House Chief of Staff Mark Meadows added a bit of clarity to Trump’s seeming-support of Pelosi, saying on Thursday that the president would support a bill that supports airline workers and prevents layoffs, and that there are no plans for discussions with Pelosi and Schumer on Thursday regarding further stimulus. On Wednesday, Meadows said that the $1.5 trillion figure in the compromise package wasn’t a “show-stopper.”

Senator John Thune of South Dakota, the party’s No. 2 in the chamber, said that $1.5 trillion would cause “a lot of heartburn” for GOP members. His colleague Ron Johnson of Wisconsin underlined that last Thursday’s $650 billion bill, was the right size. That legislation was blocked by Democrats who called it insufficient. –Bloomberg

Meadows also encouraged lawmakers to work on the deal, saying on Thursday “Take your cameras to DCA today because you’re gonna see members of Congress leaving Washington to go home and pretend like they are working hard on this particular deal.”

“Take your cameras to DCA today because you’re gonna see members of Congress leaving Washington to go home and pretend like they are working hard on this particular deal.” pic.twitter.com/JzhbihdLFD

Regardless, as Politico‘s Sherman concludes, Pelosi’s “adversaries in the White House and on Capitol Hill seem to be unable or unwilling to let her flail.”

RARELY IN WASHINGTON does a leader get so lucky. PELOSI is far from a perfect pol — in fact, there’s no such thing — but her adversaries in the White House and on Capitol Hill seem to be unable or unwilling to let her flail.