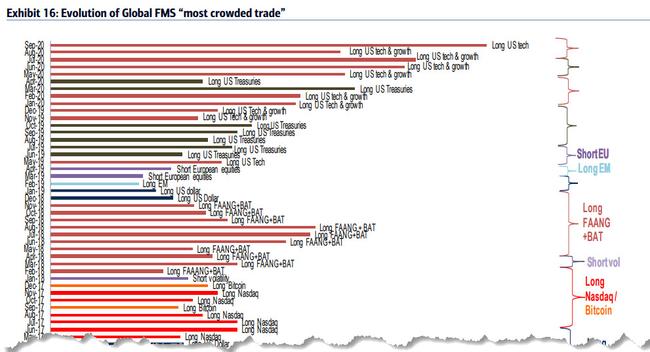 
For all the rhetoric about Fed this, and stimulus that, the simple fact is that 2020 has been a year of two trades: long tech, which is up 25% YTD, or long everything else which is still down for the year.

The fact that long tech is the only performing trade this year has not been lost on Wall Street, and according to the latest Fund Manager Survey which polled 224 panelists worth some $646 billion in AUM, and who according to BofA Chief Investment Officer Michael Hartnett, have become “paranoid tech”; indeed, when asked what they think is the most “crowded trade”, 80% – an all time high consensus – said “long tech”…

And while the FMS poll is about as credible as any run off the mill Trump vs Biden poll, with Wall Street pros frequently responding in a way that indicates severe schizophrenia, Hartnett observes that – while one wouldn’t know it looking at tech stock prices – fund managers are rotating, with tech, healthcare and large cap longs trimmed, coupled with flows into small caps and value. Which of course makes absolutely no sense judging by the continued surge in tech and the absolutely relentless mauling of anything value.

While we have repeatedly mocked the relevance of such monthly Wall Street polls, in which the respondents say what they expect to say instead of the truth, it is perhaps worth noting what according to BofA are the contrarian trades, for the simple reason that in a world where the Fed is encouraging catastrophic groupthink and frankly idiocy, they simply won’t work:

TL/DR? Just keep buying tech, forcing those who still believe such a thing as a market still exists to close their shorts and when it all comes crashing down, just beg the Fed for another bailout in the name of fighting inequality, racism, climate change or something other social justice cause.