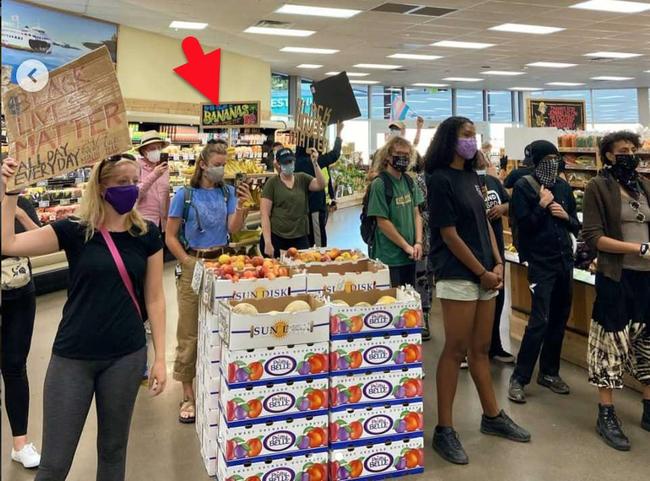 At some point, people will get sick of this.

Black Lives Matter activists occupied a Trader Joe’s in Seattle this week, claiming to be protesting “lack of access to grocery stores” and explaining to patrons “how capitalism exploits the working class.”

That “capitalism” line is straight from Marxism.

BLM founders do admit to being “trained Marxists.” Their training is trickling down.

Liberal white women throughout the city are now stockpiling frozen burritos and wondering: “has this all gone too far”? pic.twitter.com/GAkOfj55YN

Socialism and communism are forms of slavery, though they have seldom been called that.

If you’re a Uighur sent to a concentration camp in Xinjiang against your will and for having committed no crime by your unchecked rulers in the Chinese Communist Party, and you are forced to make products, what are you?

You’re no longer a Disney fan, that’s for sure.

Back to Trader Joe’s in Seattle:

This comes as leftists conflate Trader Joe’s and gentrification, according to The Atlantic in a 2019 article on the “conflicts between white Portlanders and long-time black residents” over “widening bicycle lanes” and “the construction of a new Trader Joe’s.”

So…leftists block Trader Joe’s from building stores, and then protest the “lack of access” to those stores.

Why doesn’t this compute? Were there guards blocking these protesters from entering the store they protested over “lack of access?” Were there any actual impediments to them entering?

Were the roads blocked? If they were, it was probably by another of these protest groups. Blocking people from doing things is their jam.

Black Lives Matter protesters are blocking a media bus on its way back to the hotel at the Disney campus.

Trader Joe’s is a great store. They offer fantastic products at very competitive prices. Their staff are always friendly and helpful. The stores are always clean. The produce tends to be a bit cheaper than other stores in the area and it’s just as fresh. These stores provide jobs, help the tax base, and tend to increase property values around them.

All of which reminds me, I need to go to Trader Joe’s soon.

The patrons of this Seattle store are probably left-of-center affluent BLM supporters. Their temporary kidnapping surely left them with a positive impression of the organization.

The protesters are probably affluent too.

The framing of this shot using the background sign as commentary…