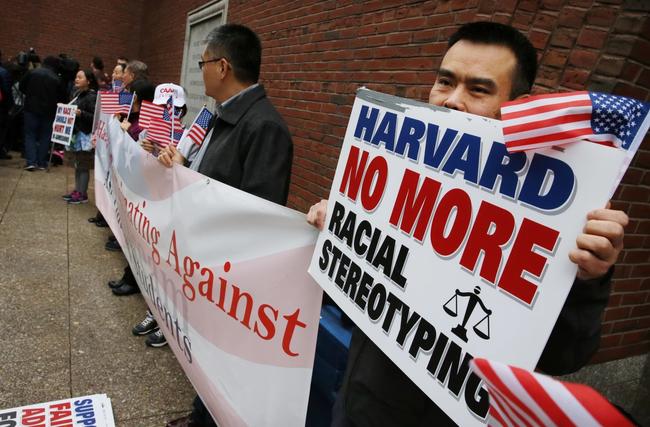 
Harvard and Yale are set to respond this week to a series of legal challenges accusing them of racial bias against Asian and White applicants during the admissions process, according to Bloomberg.

The universities will respond to two of those challenges to ‘race-conscious admissions,’ while two more make their way through the legal system against other universities. The controversy could make it all the way to the Supreme Court, which ruled over 40 years ago in its Bakke decision that race is a valid factor in creating a diverse student body.

While the decision has been reaffirmed over the years, it’s possible that the ‘conservative’ majority Supreme Court will strike Bakke down.

“Sandra Day O’Connor basically opined that we could have another 20 years or 25 years of affirmative action programs, but that they would not go on forever,” said conservative Linda Chavez, chairman of the Center for Equal Opportunity. “And yet we do see them going on forever,” she added.

“We’re now talking about kids who are getting into college on the basis of some racial or ethnic preference who are the grandchildren of people who first got those preferences.“

The Justice Department has threatened to sue Yale unless it agrees to stop considering race. “Unlawfully dividing Americans into racial and ethnic blocs fosters stereotypes, bitterness, and division,” the government wrote to the university in August. Yale, which has vowed to “vigorously defend” a process “endorsed repeatedly by the Supreme Court,” is due to respond this week.

On Wednesday, Harvard goes before a federal appeals court over a case that it engages in “racial balancing” by holding Asian-American applicants to a higher standard than other minority groups. Harvard denies discriminating and won the case in federal district court last fall. –Bloomberg

The Harvard suit and two other pending lawsuitsagainst the University of North Carolin and the University of Texas were brought by activist Edward Blum – a longtime foe of affirmative action and founder of Students for Fair Admissions. The Justice Department filed in the Harvard case in support of the group, claiming that the school’s admissions process is “infected with racial bias.”

Making a review by the Supreme Court even more likely is that there are now four challenges in four states against both public and private universities, meaning that conflicting rulings from different appeals courts would call for the higher court’s opinion.

“That’s what they want,” said Audrey Anderson, former general counsel at Vanderbilt University. “They want it to go to the Supreme Court because the justices who upheld affirmative action are not on the court anymore.”

Amid the flurry of court papers, a July study by the Education Trust, which advocates for educational opportunities for disadvantaged students, found that African Americans and Latinos continue to be underrepresented at 101 of the country’s top public universities and that their representation has even regressed in many instances over the past two decades.

“I know that there’s folks who are against affirmative action, of all backgrounds,” who believe “that we are there, and it’s not needed, and maybe there’s even some over-representation or over-emphasis on race that we need to correct for,” said Tiffany Jones, senior director of education policy at the Trust. That perception, she said, “is contradicted by the data and the research and the information about who has access to higher education.” –Bloomberg

Last year, US District Judge Allison Burroughs found that Harvard didn’t set quotas or give undue consideration to race when reviewing applicants, and instead weighed race as one of over 200 factors which includes socioeconomic background, areas of study and letters of recommendation, according to the report.

Blum, on the other hand, says that the evidence in the Harvard case “compellingly proved Harvard’s systematic discrimination against Asian-American applicants,” and that “We assert the district court erred in its analysis of this evidence and, surprisingly, virtually ignored Harvard’s own internal studies” that he says showed bias.