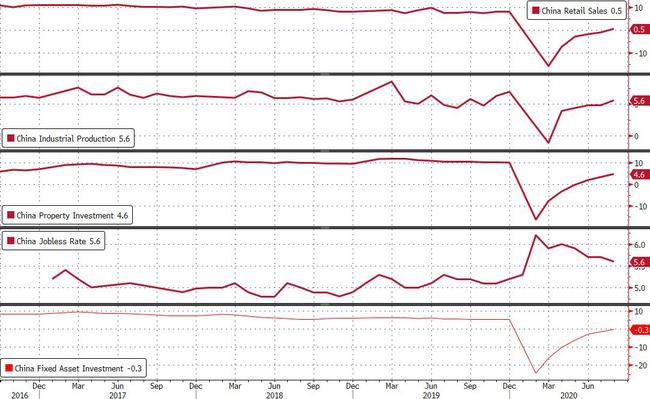 
Following another month of strong, expansionary PMIs, the latest Chinese hard data joined the soft data in beating consensus expectations, with Beijing reporting its monthly data dump moments ago which saw continued improvement across all segments, with both industrial production and retail sales handily beating expectations.

China’s The National Bureau of Statistics reported the following figures for August:

“We think that China’s economic recovery is on a reasonably firm footing now and should continue through the fourth quarter and into 2021, with solid investment growth, gradually recovering consumption momentum and resilient exports,” said Louis Kuijs, head of Asia at Oxford Economics.

What is strange, while shops, restaurants and entertainment venues were closed for much of the first quarter, even as they reopened, people have been reluctant to engage in the sort of spending the authorities might have hoped would kick-start the recovery. And yet, here it is in the economic data, clear as day. While things have been slowly getting better, with passenger car sales rising 9.0% in August from a year earlier, and continuing to grow strongly into the first weeks of September, according to the China Passenger Car Association, cinema box office revenue, however, fell 56.8% in August, according to the China Movie Data Information Network.

Of course, this being China, for the most part the “recovery” has been powered by traditional levers of growth: soaring exports and a booming construction sector. This trend continued in August with excavator sales – a proxy for construction work in China – rocketing 51.3% year on year in August, after growing 54.8% in July and 63.1% in the second quarter of the year. Meanwhile, as the SCMP notes, heavy-duty truck sales rose 74.7% in August, per industry data cited by Nomura, significant growth even if it was down from 89.0% in July.

Also curious: one day after China reported another monthly increase in housing prices, the NBS reported property development data that were mixed at best:

And in some good news for the battered commodities sector (and value investors everywhere), China’s apparent oil demand rose almost double digits, up 9.9% to 13.51m b/d in Aug.

While the yuan was already surging ahead of the news, having risen above the key level of 6.80 which has proven to be a strong resistance on numerous prior occasions, the offshore yuan was last seen at 6.7884, the highest print since May 2019.

While China may be delighted to demonstrate the yuan’s strength, if purely from a political perspective, sooner or later, the deflationary aspect of the strong currency – especially in a world where global trade is still moribund – will soon start impacting the country which as we noted over the weekend, is injecting record amounts of credit to jumpstart a benign credit impulse and a global reflationary wave.

As Bloomberg’s George Lei writes, “the offshore yuan’s advance this quarter is poised to be among the best ever since the currency started trading a decade ago. For the onshore yuan, its 3.72% gain so far this quarter represents the best performance since 1Q 2008. From a trading perspective, it is difficult to go against momentum for long and not lose money. Yuan shorts piled up – and then were crushed hard – when the offshore currency fell to a record low of 7.1965 per dollar on May 27, before rallying for the next few months. This time might be different for the currency’s momentum, however. Multiple warning signs have already flashed, pointing to at least a stall – and quite possibly a reversal – in the currency’s recent rally.”

Perhaps, but judging by the latest strong economic data, that reversal won’t be today.