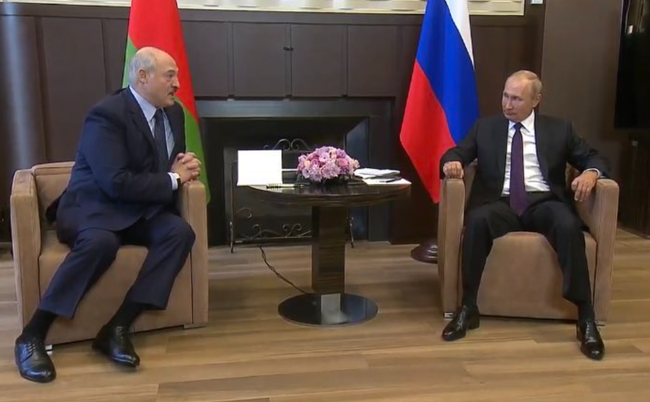 
Among the most interesting and bellicose comments to come out of Putin’s meeting with embattled Belarusian President Alexander Lukashenko in Sochi on Monday related to future cooperation between the countries’ armies.

Lukashenko urged that both countries prepare to resist possible external aggression during his meeting, based on regional media reports of his statements.

In statements sure to further outrage the opposition gathered in the streets of Minsk, he said of NATO forces, “I believe that in no case should we look back at what they will tell us. They disregard us, they do not look at our wariness, they conduct exercises when they want. Therefore, we also, if you support this thesis, without straining the overall situation, we will prepare our armies so that, God forbid, we could resist it.”

He said this on the same day that elite Russian airborne forces kicked off joint military drills with Belarus’ army, pre-planned drills set to run through September 25.

“Our defense security has never caused any disputes and doubts. We should not ask anyone whether or not to conduct exercises with us. We have been conducting and will continue to conduct them,” Lukashenko underscored.

“We will plan these exercises for years to come, we will specify them, and we must conduct both small and large exercises together,” he added.

Meanwhile, The Guardian reported on what was said to be an awkward press conference:

“A friend is in trouble, and I say that sincerely,” Lukashenko told Putin in televised remarks at the start of the meeting, thanking him for his support. Putin at times seemed visibly bored, tapping his hands and feet as Lukashenko embarked on a long monologue.

Putin said Russia would offer a loan of $1.5bn to Belarus, which could help Lukashenko avoid an economic crisis in the short term.

#Belarus. #Lukashenko is trying to convince #Putin about a military threat from the West, but Putin is barely listening (playing on camera, obvsly). That was another humiliation Lukashenko has faced today. He was earlier welcomed by Krasnodar governor, not even a state official pic.twitter.com/xrXuVvojom

Indeed there was much immediate commentary on Putin’s body language, strongly suggesting the Kremlin could be willing to let Lukashenko get swept out of power, but so long as it’s not fundamentally driven by external Western forces and elements.

Putin emphasized in statements to the press that Belarus must resolve its own issues internally, but without any foreign interference.

#Belarus President #Lukashenko is in #Moscow today for a meeting with #Russia‘s #Putin.
Those of you fond of reading body language at such encounters to see how the conversation is shaped – see this. pic.twitter.com/1bfWGp3elg

“Russian Prime Minister [Mikhail] Mishustin has recently been to Belarus on a visit. He held serious large talks, which were successful in all fields where we interact and on financial issues. It was agreed that Russia would give Belarus a state loan of $1.5 billion in this difficult period,” Putin said.

But so far it appears Putin is cool on the idea of getting sucked too far into the Belarus crisis, perhaps not seeing that Ukraine style red lines have yet been crossed. But the question remains: ahead of the US November election, will Washington and its intelligence services be willing to go full-blown Ukraine to oust the longtime strongman from office?