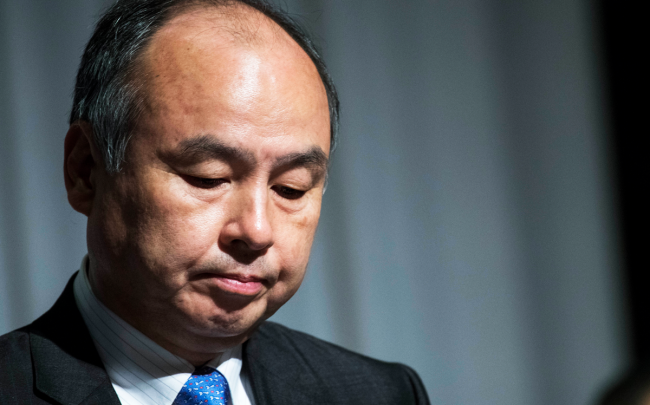 
Just like Donald Trump, SoftBank’s Masa Son is especially sensitive about stock prices and one in particular: that of his own company, the second largest in Japan after Toyota. And, as we explained yesterday, Masa Son did not take to the recent slide in SoftBank’s stock price kindly: as a reminder, SoftBank tumbled following news that it was the company behind the August gamma meltup (with call-buying retail investors coming along for the ride), leading to “intense shareholder scrutiny of SoftBank’s recent aggressive bets on US technology stocks” and even the nickname the “Nasdaq whale.”

In response, SoftBank promptly leaked to Bloomberg that it was “reconsidering” its option strategy approach, although as even Bloomberg admitted, it was not clear “what changes might be made.”

It gets even more confusing because as the FT reports today, “the company sees itself increasingly as an investor and asset manager rather than a direct operator of businesses as it has been for its 39-year history” which as analysts noted, was the very reason why SoftBank’s shares were pummeled as investors prompted disapproved of Masa Son’s drift from his core “competency” (it remains to be seen just how competent he is in offloading his dozens of private portfolio companies at a profit).

And so, as the FT also reported on Sunday,  SoftBank “executives” – read Masa Son – clearly displeased with the market’s reaction to the news it had successfully sparked a major market gamma squeeze sending tech names and the S&P to all time high generating a reported $4 billion in profits in the process, are now considering taking the Japanese technology group private as the company seeks a new strategy after disposing of several large assets, including the just announced upcoming  sale of Arm to Nvidia in a cash-and-stock sale expected to value Arm at about $40 billion.

The discussions have been driven by frustrations over what else: the company’s “low” stock price – it is down a little over 10% so far in 2020  – and the company’s $115 billion public valuation, which despite the 2nd largest buyback program after Apple, continues to trade at a substantial discount to the value of its individual holdings – which reached as much as 73% during tne March lows – something which Masa Son harps on during every SoftBank earnings call.

Adding insult to injury, the stock price of SoftBank Corp has underperformed Japan’s Nikkei 225 index and is also below the 1,500 yen price at which it sold units in its 2018 IPO, which to this day remains Japan’s biggest-ever stock market listing, and was widely regarded at the time as finalizing the group’s transition from domestic telecommunications company to what Reuters dubbed “a monolithic global tech investor.”

Yet since then SoftBank has faced a host of challenges including losses on investments made by its $100 billion Vision Fund, activist pressure from hedge fund Elliott Management and questions regarding significant option purchases during the recent run-up in the U.S. stock market.

According to the FT, the talks on taking SoftBank private have been speeded up due to number of fundamental changes to SoftBank’s business strategy to become a long-term investor in businesses rather than a manager of companies, although even there problems have emerged. SoftBank’s recent investment track record has been mediocre at best, including a particularly large bet on the collapsed office provider WeWork, resulting in SoftBank reporting an $18 billion loss at the Vision Fund in May, pushing the conglomerate to a record loss.

It’s unclear just how or who could possibly fund such a massive transaction, although that’s probably not the right question; the real question that should be asked is why is SoftBank increasingly following in the footsteps of that other “questionable” company, Tesla, which readers will recall had “funding secured” for an MBO at $420, only for this to turn out to be a tweeted lie by the then mind-altered CEO. In fact, what is likely going on is that just like Elon Musk, Masa Son appears to be increasingly engaged in either financial engineering – SoftBank is nearing the end of an asset sale programme launched in March that was meant to fund $41bn in share buybacks and debt repayments – and massive buybacks ever since the public’s faith in its investing acumen was shattered, or – when that fails – pivoting the narrative and pursuing other get rich schemes: like an MBO. That said, if Son truly was looking to do an MBO, he would have done so quickly and without leaking the news first, as any deal just became more expensive once the stock prices rises to reflect the latest news (which is likely all Masa Son intended anyway).

Additionally, a potential delisting of SoftBank, which Masayoshi has flirted with multiple times the past, would strike a heavy blow to the Tokyo stock market, where the company represents the closest business Japan has to Silicon Valley titans, according to the FT, because as noted above, SoftBank is the second-heaviest weighted stock in the Nikkei 225 Average.

There is another way that Masa Son and Elon are similar: the Japanese tech mogul has borrowed heavily against his shares and is desperate to get the stock price higher. In fact, the company’s asset disposal program was launched in March after SoftBank shares fell to their lowest levels since 2016 sparking whispers that Son could be facing a margin call. Meanwhile, SoftBank’s debt stood at $115bn before the asset sales.

Finally, and also just like Tesla, SoftBank has come under criticism over standards of corporate governance.

In short, one almost wonders when @masason will start tweeting daily in hopes of pushing up his stock price.

In the end, most likely nothing will happen. According to the FT report, “internal opposition to a management buyout remains strong, particularly in Japan where there is strong prestige attached to being a listed company.” Meanwhile, analysts and investors have said they regard the chances of an MBO as low, as a large part of the relationship that SoftBank has with its megabank lenders in Japan hinges upon its status as one of the country’s most valuable listed companies. Listed status as a company also remains critical in Japan to attracting the best graduates.