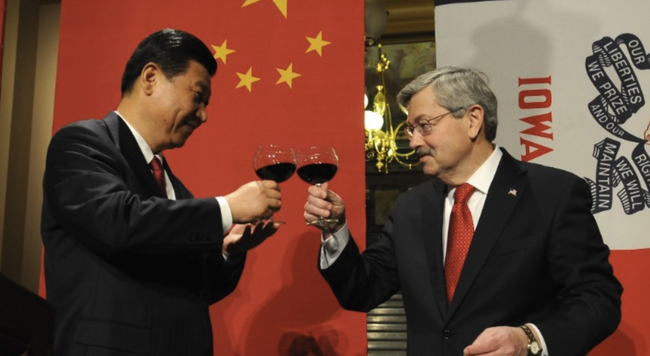 
In an unexpected move, former Iowa Gov Terry Branstad is stepping down from his position as the US Ambassador to China after more than three years on the job as tensions between Washington and Beijing reach a fever pitch ahead of the November election.

He’s expected to leave Beijing in October, which means he’ll be gone before the November election.

That will leave the US without a Congressionally-confirmed ambassador in place in Beijing during what’s expected to be one of the most difficult elections in US history. Allegations of meddling from China, Russia and other states have only exacerbated a national mood of paranoia.

Branstad was chosen early on, and was seen as a major ‘get’ for Trump during the early days, given Branstad’s status as the former governor of Iowa, an agricultural state with deep trade links to China.

I thank Ambassador Terry Branstad for his more than three years of service to the American people as U.S. Ambassador to the People’s Republic of China.

President @realDonaldTrump chose Ambassador Branstad because his decades long experience dealing with China made him the best person to represent the Administration and to defend American interests and ideals in this important relationship.

Ambassador Branstad has contributed to rebalancing U.S.-China relations so that it is results-oriented, reciprocal, and fair. This will have lasting, positive effects on U.S. foreign policy in the Asia-Pacific for decades to come.