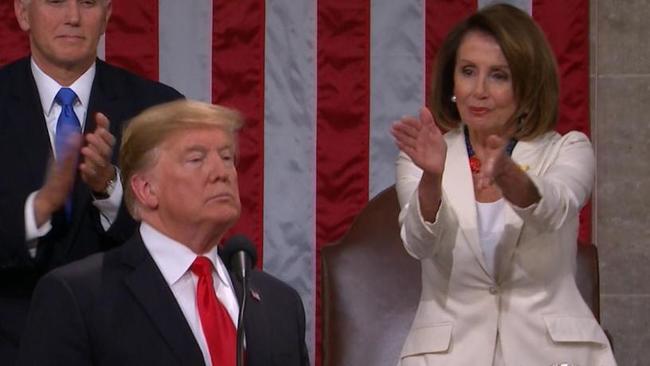 I’ve learned a few things about politics by watching my goats over the years. Herd queens have to be beaten to step aside. They won’t give up status willingly.

I saw this first hand when a vicious challenge ended with a broken horn, humiliation and blood. House Speaker Nancy Pelosi is a tough old goat who is clearly making her last stand, facing the toughest fight of her political career.

Congress is at a crossroads over a stimulus package before the election. Pelosi has run out of good choices to force the Republicans into another bad deal, which is her trademark move.

Internal squabbling and strategic missteps has her charting a most dangerous path.

The House returns to session today facing an impasse over another stimulus bill which see both sides entrenched in their positions.

Just under two months until the election, however, the big question is, “Who has the leverage?”

Pelosi always fronts that she’s on top of things. She rules House Democrats with an iron fist and somehow always manages to win these confrontations.

But this time may be very different. Why?

This time she has no leverage. This time the Republicans have the upper hand. Even Bloomberg had to admit that the situation is not in Pelosi’s favor, while talking about all of her options.

Among the unlikely events that could now break the deadlock: President Donald Trump changing tack amid alarm about poll numbers, a sudden reversal of economic indicators that have recently trended upward, and Pelosi or Senate Majority Leader Mitch McConnell facing a revolt by their own vulnerable, moderate members.

It isn’t that the economic situation is good. It is that there is simply no justification for continued abject panic over COVID-19 to keep people on the dole.

Public opinion has turned against Pelosi and the Democrats in places where they pushed too hard. People want their lives back and for the looting and rioting to end.

Now they are faced with a stark choice: hope the polls are right and Joe Biden will be president on November 4th or challenge the election if they aren’t.

Neither of those choices leave Pelosi with any option to cave to Senate Republicans, especially as Mitch McConnell gave his people the opportunity to vote for something last week to take back to the voters.

All Chuck Schumer could do is filibuster.

It’s clear Pelosi’s strategy has been to allow destruction in battleground states and blame Trump for it. This was their cover story for forcing the Republicans to bail out failing Blue States whose economies were already in trouble regardless of the COVID-19 lockdowns. States like California and Illinois need massive bail outs to survive.

Hell, California needs a lot more than money at this point.

I was asked last week by Sputnik about this situation and what I thought was happening. I didn’t expect a breakthrough in talks then and I don’t today because both sides have seen beyond this fight to what happens after the people vote on November 3rd.

Pelosi is now the villain in this political psycho-drama and all she’s doing is playing to her base, which is dwindling in real terms.

Once talks break down completely and there is no hope of a deal, Trump will unlock some of the Treasury’s massive $1.57 trillion checking account as emergency spending while campaigning on Pelosi’s heartlessness.

It’s terrible economics but good politics. Pelosi can’t fold because she’ll lose control of the House. An internal struggle for leadership will emerge which she won’t survive, no matter how tough she thinks she still is.

Horns break. So do ribs. The Squad is out for her head.

Trump can’t fold because this is his opportunity to break the Democrats and show faith in the American people that they know who’s at fault for their misery.

And as long as there is no signs of stress in the global banking system, which according to the Fed’s latest balance sheet reports there isn’t, Trump and Mnuchin have no need to cave to Pelosi’s ridiculous demands. She’s already come down from $3.6 trillion to around $2 trillion. Trump has rolled back his offers thanks to improving economic statistics playing even harder ball with her.

Since they are prepared to challenge the results in any event, in her mind, this is no choice at all.

And we’ll find out just how brittle her horns are.

My comments to Sputnik are below the break:

Sputnik: How likely is it that representatives from both parties will be able to agree on a bill within the week?

Tom Luongo: Not likely, but this game always plays out this way in DC. They wait until the last minute and then there is a massive cave by one side. Usually, it is the Republicans that fold. This time, if there is an agreement, it will be the Democrats who fold, because Trump and company have done a very credible job of blaming them for holding back help.

That said, this time it may be different. The divide in Washington is deep with Speaker Nancy Pelosi calling Congressional Republicans “domestic enemies of the State”. She may just pick this hill to die on hoping it can cause a deep and chaotic stock market crash. There is a real desperation on the part of leading Democrats and it’s leading them to throw everything at the wall in the hope that something will stick to President Trump in the minds of voters.

The details of what they disagree on at this point is less important than that they won’t agree. Pelosi and Schumer have staked out positions that are unacceptable to Republicans, asking not just for the moon but also explicit guarantees that their bankrupt and corrupt states like New York, Illinois and California are bailed out instead of focusing the support on the people this time around. Trump has fired up both his base and a lot of swing voters with his intransigence on critical race theory, refusing Federal aid to Minneapolis and exposing the venality of local mayors in Chicago, Portland and Atlanta.

Both sides always over-ask purely to posture to their respective bases while trying to claim the moral high ground. I don’t think Pelosi has a leg to stand on given that Trump will just spend the money he has in his checking account, around $1.7 trillion, under emergency measures and his previously issued Executive Orders. While he’s loathe to do this, he can, will and should. Pelosi is terrified of Americans getting another $3000 check from Trump on the eve of the
election.

Sputnik: Can we hope that both parties will put aside their political squabbles and start rebuilding
the economy before the presidential election?

Tom Luongo: In a word. No. The Democrats’ strategy is to wreak as much havoc and destruction on the US economy as possible and blame it on Trump. So, they won’t cave even though they are increasingly thin political ice. Their only hope, as I wrote recently, is to foment violence and hope for Trump to over-react and set the stage for a false flag which turns the American people against him.

There is a strong undercurrent in the US that Trump is the only reasonable choice after four years of the Democrats acting like babies over losing the election. There is a real danger for them to lose this election the same way Labour got trounced in last year’s general election because they were seen as the ones obstinately refusing to implement the will of the people. Americans elected Trump to drain the swamp, end Obamacare and rein in a corrupt Congress. Their histrionics which lead them to oppose everything he does has led them to the brink of their own destruction.

Sputnik: How likely is it that Democrats will agree to a proposal from the Republicans to cut
financial aid? (According to some reports, there are polls that indicate Trump’s rating is growing, the economy is improving, and unemployment is falling).

Tom Luongo: The Democrats still believe that their long-term survival lies with poisoning the American youth to the point where their Marxist cultural revolution is inevitable. Therefore, they will never willingly give up anything that lessens their control over the educational system in the US and financial aid to students is one of these pillars of control. It is nothing more than investing in lifelong voters with taxpayer money. Trump’s poll numbers are good. The internals, by racial sub-category, put him in the driver’s seat for the election.

Biden cannot win most of the battleground states if Trump holds more than 15% of blacks and 25% of Hispanics. This is why Biden is coming out against the violence. In my opinion, it won’t work at all. Their entire strategy is focused on getting people to blame Trump and that isn’t working, now all they have is rearguard actions to shore up the places they are supposed to win to retain the House and challenge the election of voter fraud and mail-in ballots to delay certification.

What’s pathetic is that the lawyers and judges will decide this election, not the voters. But this is exactly what the oligarchy I call The Davos Crowd wants, an end to pesky things like public opinion, democracy and empowered people.

Join My Patreon if unpacking politico-speak is tiring. Install the Brave Browser to empower your voice and not Google’s.