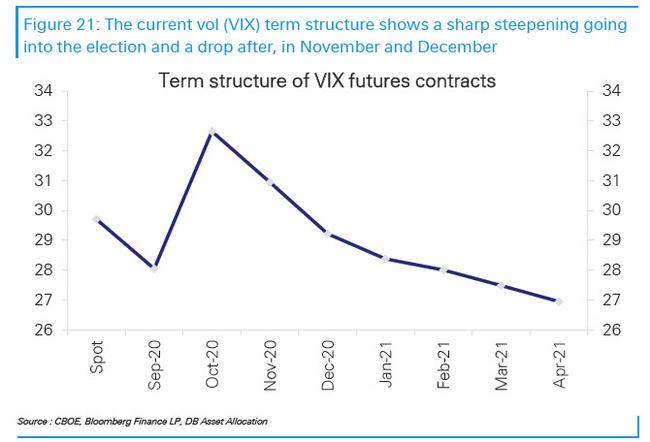 
Despite the broad normalization of the put-call ratio and moderating option gamma exposure following last week’s fireworks, investors still have to contend with the upcoming macro event of the U.S. Presidential elections. As Deutsche Bank’s Parag Thatte notes, the VIX futures curve continues to show a historically high premium for the October expiry contracts when compared to the September and November expiries.

This is in keeping with market patterns driven by investors buying protection for potential volatility in the run up to key calendar risk events, then covering on a clear resolution. However, this time around it will hardly be that simple: with a likely unprecedented volume of mail-in ballots, prospects for volatility enduring post-election day are high. Back in July, Goldman’s David Kostin wrote that one of the key concerns expressed by its clients is that a contested election could drag on, resulting in little clarity for weeks if not months, in a rerun of the contested 2000 election between Al Gore and George W. Bush, when it took a Supreme Court challenge and 34 days for the winner to be decided. This is what Goldman said then:

Health concerns and social distancing protocols suggest that more voters than ever will decide not to cast ballots at traditional polling stations on Election Day and instead vote by mail. In the case of a close election, it will take time to count – and invariably re-count – all the absentee and mail-in ballots. The deadline for each state to certify its result and finalize electors is December 8th (35 days after the election) or six days before the Electoral College convenes on December 14th (first Monday after the second Wednesday in December).

Echoing this, and looking at the VIX chart above, Deutsche’s Parag wrote that the pricing of VIX futures with November and December expiries are likely too sanguine that there will be a quick and clear outcome of the elections. In fact, if indeed the election won’t be resolved until mid-December (at the earliest), the kink needs to move by at least 2 months, presenting a major arbitrage opportunity.

Today, in his latest weekly note, JPM’s chief equity strategist Misla Matejka joins this chorus of warnings about a contested election result, which he sees as the “worst-case scenario” for the market (Matejka sees it as the top risk for market performance into the year-end), adding that potential legislative paralysis could be “even more damaging” than Bush vs Gore for economy, as key stimulus measures to support economy might be delayed at a time when a fiscal stimulus deal already seems unlikely before the election.

Below, Matejka lays out his concerns:

Past US presidential elections have been a source of volatility for equities, and the upcoming one might deliver on this front, too. With the economy still reeling from the effects of COVID-19, the election event risk could have significant implications for the probability of further stimulus measures for the US economy.

Matjeka next notes that after a period of narrowing in the past weeks, there is some renewed stabilization, and most polls still put Biden in the lead with a margin of 5-10% even though recently none other than JPMorgan’s Marko Kolanovic said that he still sees Trump’s gain in the polls accelerating.

The JPM strategist next notes that an analysis of historic polls by the bank’s fixed income strategists suggests that it may be another month before we can use the polling information to predict the eventual election result with increased certainty.

Within this, Trump’s approval rating although on the lower side, has been among the more stable ones as seen for recent US presidents. Here JPM notes that the average Trump supporter has been relatively unperturbed by various developments through his presidency, and this relative stability of Trump’s core voter base is a key support for the incumbent president going into elections.

Second, polls in a number of swing states are relatively close. Arizona, Florida, North Carolina and Pennsylvania have a less than a 5% margin. As a reminder, some of these states saw a +3% swing in actual voting in favour of Trump compared to the polling data ahead of the 2016 elections.

Compared to past elections, JPM notes that there is higher public interest this time around. Having said that, the bank predicts that a similar swing is less likely given the much lower proportion of undecided voters this time around compared to the 2016 elections.

From a policy perspective, Trump represents a continuity of existing programs such as lower tax rates for corporates and individuals, reduced environmental protections in favor of increased oil and gas exploration, but could also mean heightened geopolitical risks.

On the other hand, while Biden could repeal some of Trump’s favourable tax policies and ban new leases on drilling on federal land, other policies such rising minimum wage to $15/hr could be a positive for the consumer. He has also promised to increase infrastructure spending and Biden’s foreign policy is likely to be less confrontational.

This, in turn, brings us to JPM’s conclusion that “the worst case scenario for the broader market would likely be the contested election result”, or as he puts it, “a scenario where the votes are so close that the results are delayed because of recounting and possible legal tussles.”

Matejka then highlights the same kink in the VIX term structure shown above, although unlike Thatte, he shows a slightly different curve, pointing out that “interestingly, the term structure peaks in January ’21, rather than around the November elections date, suggesting that markets are pricing in an increasing risk of a contested election result.”

The 2000 US presidential election between Bush and Gore provides a precedent for this. Equity markets struggled in the period following elections, with S&P500 dropping close to 12%.

Fast forward 20 years, when “in the current scenario,” JPM believes that “the potential legislative paralysis could be even more damaging for the economy, as key stimulus measures to support the economy might be delayed, and the partisanship is very elevated.”

Finally, the same point was underscore today by Artemis Capital CIO who earlier today also wrote that “vol markets value the US election as a massive binary risk event that occurs at one point-in-time (like earnings in a stock)” However, “the real risk is a contested election and US constitutional crisis that occurs throughout time.  If the latter comes to pass, forward vol is very mispriced.”