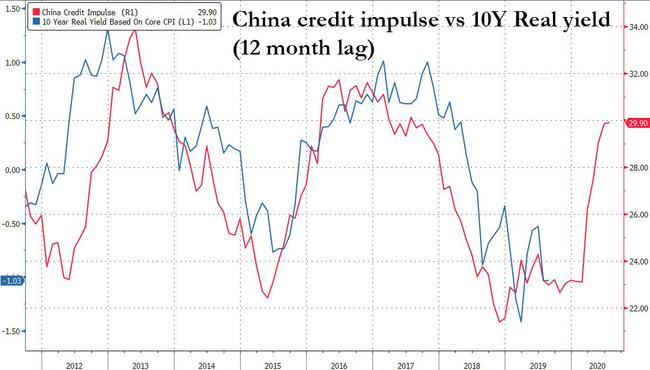 
While the financial punditry is preoccupied with the Fed and its $7 trillion balance sheet, whether Powell is purchasing bond ETFs or has enigmatically stopped doing so (as it did in August), and whether the US central bank has any hope of sparking inflation (with or without the help of Congress), what most are forgetting is that when it comes to any global reflationary spark, China – and its $40 trillion financial system which is double that of the US – has been a far more critical driver than the US ever since the financial crisis.

Here is a breakdown of the latest August credit data:

Going forward, September TSF is expected to remain “robust” according to Goldman, on continued government bond issuance. Given the recent growth momentum and credit strength, policymakers are likely to stay on hold. That said, a slowdown in credit growth will likely come in Q4 as government bond issuance is likely to slow and monetary authorities are in no rush to loosen.

Why does China’s record credit injection in 2020 matter? Because as we showed recently, China’s notorious credit impulse (which as UBS admitted several years ago is the only thing that matters for global reflation), and which is a function of how much credit Beijing creates leads real 10Y yields with a 12 month lead time. As shown in the chart below, a simple correlation suggests that real yields are set to soar by 150bps from their current -1% to approximately 50bps, and that’s assuming China does nothing to further stimulate its economy over the next 6 months.

In other words, if this relationship holds – and there is no reason to expect why it shouldn’t we are not about 6 months away from the next major spike in real yields, which while probably not as violent as Stanley Druckenmiller expects with his forecast of 5-10% inflation, will be sufficient to cause another crash in both risk assets and Treasurys, and spark some real confusion within the Fed which by then will have firmly cemented the perception that no matter what happens to inflation or real rates it will not tighten financial conditions.

Alas, now that China is once again injecting credit in its economy at a furious pace and has even reactivated the shadow banking spigots, it appears that the next spike higher in real rates is scheduled to hit some time in early 2021.