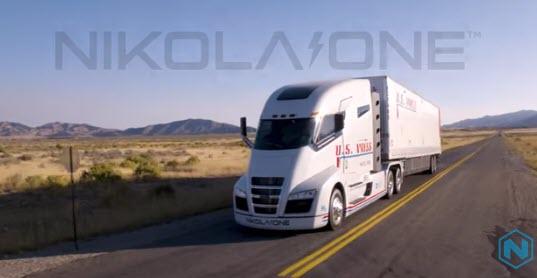 
Among the bolder accusations made by Hindenburg Research in their recent scathing report about Nikola Corporation was the allegation that Nikola faked its Nikola One semi truck “in motion” video, which appeared to show a functioning big rig barreling through the desert, trailer in tow.

Hindenburg alleged, based on a former employee who spoke with Nikola’s Chief Engineer Kevin Lynk that “the video was simply the result of Nikola towing the truck to the top of a hill and rolling it down.”

In other words, the video wasn’t of a working semi, but rather just a truck rolling down a hill.

“The deception involved in the production of this video appears to have been elaborate,” the report claims. “The company scouted a remote section of road on the Mormon Trail just to the south of Grantsville, Utah, which we have since located. This section of road is lightly used and features a 2-mile-long perfectly straight stretch with a consistent 3 percent grade–plenty of length and enough of a slope to get a motorless truck rolling.”

Hindenburg even claimed in their report that they “rolled a vehicle in neutral down the same hill” and “reached a top speed of 56 mph and rolled for ~2.1 miles”.

This has prompted some social media sleuths to do their own investigating; heading out to the precise area mentioned in the Hindenburg report and filming their vehicles, in neutral, heading down the same stretch of road. The hashtag #NikolaChallenge is being used to document the results.

Like, for instance, this video posted over the weekend which appears to show Twitter user @Nick_P3D taking his Toyota Tacoma to the designated spot on Mormon Trail and letting it roll down the hill in neutral.

Will return w/ Model 3 soon. Went off-roading afterward this round.

“We’re starting just below the cattle guard,” he jokes. “It’s not a pusher, I assure you.”

The video his pickup going from 0 mph in neutral to about 48 miles per hour. “This is a Nikola powertrain we’re testing,” the user jokes. “I have no need to order the Badger. I’ve converted my Tacoma to the Nikola powertrain,” he says at the end of the video.

The speakeasy economy of WeChat

Should you buy Ethereum Classic as its recovery accelerates?