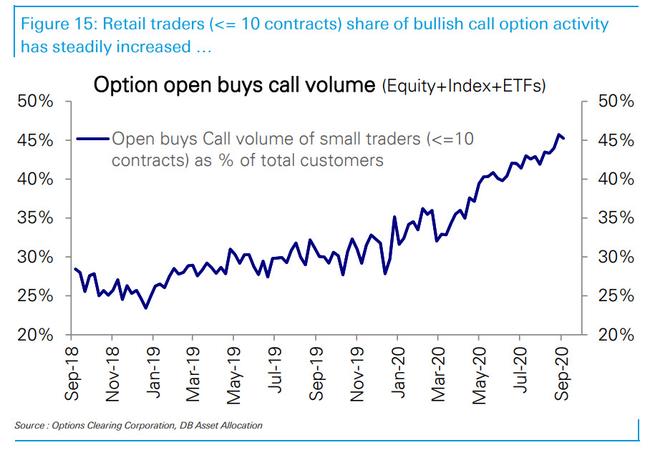 
Last week’s market pullback – which led to the fastest ever 10% correction in the Nasdaq from an all time high – was predictably concentrated in mega-cap growth (MCG) stocks, and followed their strong outperformance in August.

Yet despite this “relative correction” in the MCGs, Deutsche’s Parah Thatte notes that it has only taken them to the bottom of the range around their very strong trend of outperformance year-to-date (44%).

What was behind this move? Similar to the last pullback in early June, options positioning had become very long by the beginning of this month…

… with the put/call volumes ratio at the bottom of its 10 year range.

This was driven by a rise in calls, while puts were at year-to-date lows.

At the same time, the spread between 1m implied vols for the Nasdaq (VXN) and the S&P 500 (VIX) reached its widest since 2008, underscoring the bullish sentiment on large cap growth stocks.

This bullish sentiment and positioning has been narrowly focused, as measures of equity positioning for both systematic and discretionary investors have remained well in underweight territory (17th and 37th percentiles according to DB’s records, respectively).

Of course, while a big part of the recent market volatility was due to SoftBank’s attempt to corner gamma during the sleepy days of August, Thatte notes that bullish options positioning was in fact led by retail investors. OCC data show robust increases in open long calls and open short puts across the board, but led by small retail traders (option sizes of <10 contracts) rather than mid-size (10-50 contracts) or large traders (>50 contracts).

In fact, both Robintrack and OCC data point to these retail traders being much more focused on single stock plays than on index or ETF instruments, something we observed on Friday when we discussed the latest post-correction frenzy in Apple out of the money “lottery ticket” calls driven entirely by retail traders.

In their feverish pursuit of unlimited upside, retail traders have given up on any hedging – thanks to the Fed which virtually everyone, both institutions and daytraders, now expects will step in and reverse any new market crash – and the put/call ratio among retail investors (<10 contracts) is the lowest on record among all investor classes.

The retail call-buying frenzy has accelerated to such an extent that as the following stunning chart from Thatte shows, retail traders are on pace to soon have a majority share in all bullish call option activity (currently at 45% and up from 30% at the beginning the year), concluding the process we first discussed in May in “How retail investors took over the stock market“…

… and especially in single stocks as shown in the next chart.

This means that two months after we reported of a historic inversion in the market, when as Goldman first observed the average daily value of options traded has exceeded shares for the first time amid an unprecedented surge in single stock trading volumes…

… we are on the cusp of another historic inversion, one where retail daytraders fully cement their role as the dominant price setters in the call space, at least until we have a sufficiently powerful market crash to deter such frenzied momentum chasing. Because clearly last week’s shallow correction – which was quickly BTFDed – was not enough.

Finally, while it appears that nobody can stop talking about the rising role of retail traders (with or without their SoftBank synergies), here are some observations on what the other key players in the market did in the past week, courtesy of Deutsche: