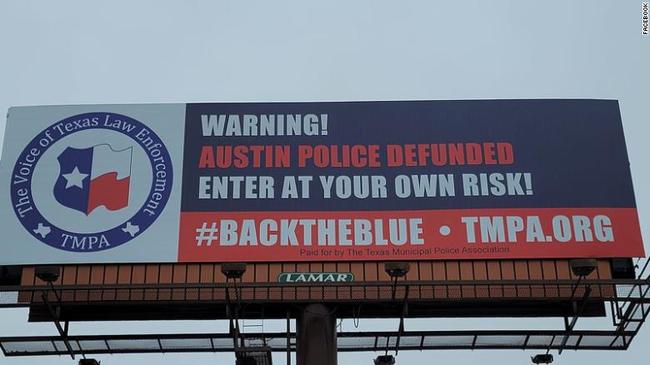 
A Texas police union secured space on two giant billboards along Interstate 35 entering Austin, Texas, that warns motorists they are about to enter a liberal city that has defunded local law enforcement, reported CBS News. The implications of defunding the police, as readers may know, is that violent crime surges, and police may not be able to respond to an emergency call, which explains why gun sales are soaring and ammo shortages persist. The next hot commodity will be bulletproof vests.

“Warning! Austin Police Defunded Enter at Your Own Risk,” one billboard reads.

The second says, “Limited support next 20 miles,” according to the Texas Municipal Police Association (TMPA), who recently had the signs erected after the city council slashed the Austin Police Department’s budget in August.

TMPA, the largest law enforcement organization in Texas, was angered by the Austin City Council’s vote to cut the police department’s budget by $150 million with immediate cuts around $21.5 million.

“This reckless act, a political stunt by the city council pandering to the radical left, will do nothing but endanger the people of Austin,” TMPA wrote in a Facebook post.

“As the largest police association in Texas, it is our duty and responsibility to stand up for the brave men and woman of the APD, as well as the other law enforcement agencies with jurisdiction within the city limits which will have less of APDs resources to depend on, and to raise public awareness of the dangers of defunding not just Austin, but any city across the U.S.,” the post went onto say.

Texas Lieutenant Governor Dan Patrick tweeted at TMPA, thanking the organization “for these great new billboards that went up in Austin” on Sept. 9.

Thank you to the Texas Municipal Police Association for these great new billboards that went up in Austin today. @austintexasgov ignored public safety and made a dangerous decision to #defundpolice #bigmistake #backtheblue #txlege pic.twitter.com/bGO8X1Hyur

Governor Greg Abbott also tweeted about the not-so-welcoming billboards on Sept. 9. He said:

“Billboard on I-35 warns ‘Enter at your own risk!’ after Austin votes to defund police.”

Billboard on I-35 warns ‘Enter at your own risk!’ after Austin votes to defund police.#TexasBacksTheBluehttps://t.co/4RFhUfap10

In response to the defunding, Abbott introduced new legislation in August that penalizes municipalities that slash police budgets:

“To maintain the safety that our communities deserve today, we are announcing a legislative proposal that will discourage defunding law enforcement in Texas,” said the governor. “Any city that defunds police departments will have its property tax revenue frozen at the current level. They will ever be able to increase property tax revenue again if they defund police.”

TMPA’s billboards are well justified, serve as a disclaimer before motorists enter city limits as their lives could be at risk.  Some residents have questions about their security of who will they turn to when an emergency happens. This dangerous language introduced by ‘woke’ city councils is not just a phenomenon in Austin but is happening across the U.S.

And maybe, just maybe, gun sales in Texas are soaring because defunding the police means every resident for themselves in the Austin metro area. The push to defund started after multiple Black people died in police custody earlier this year, including George Floyd in Minneapolis, and Breonna Taylor in Louisville.

Instead of city councils across major U.S. metro areas calling for police budget cuts – they should be demanding the demilitarize of police departments, as more than $1.7 billion worth of military equipment, including bomb-proof trucks, assault rifles, night-vision goggles, and other military-grade weapons, have been transferred from the Army to local police departments.