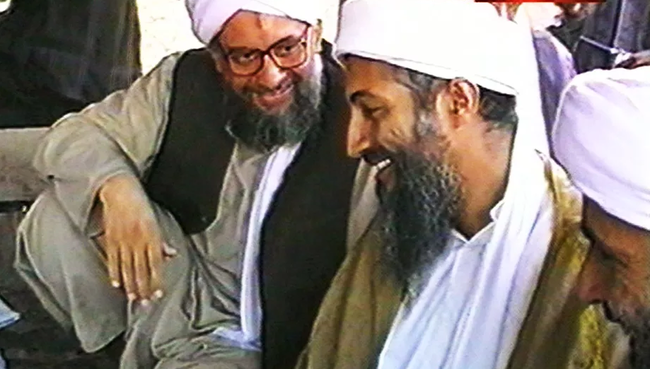 
As Americans pause to remember the tragic events of September 11, 2001 which saw almost 3,000 innocents killed in the worst terror attack in United States history, it might also be worth contemplating the horrific wars and foreign quagmires unleashed during the subsequent ‘war on terror’.

Bush’s so-called Global War on Terror targeted ‘rogue states’ like Saddam’s Iraq, but also consistently had a focus on uprooting and destroying al-Qaeda and other armed Islamist terror organizations (this led to the falsehood that Baathist Saddam and AQ were in cahoots). But the idea that Washington from the start saw al-Qaeda and its affiliates as some kind of eternal enemy is largely a myth.

Recall that the US covertly supported the Afghan mujahideen and other international jihadists throughout the 1980’s Afghan-Soviet War, the very campaign in which hardened al-Qaeda terrorists got their start. In 1999 The Guardian in a rare moment of honest mainstream journalism warned of the Frankenstein the CIA created — among their ranks a terror mastermind named Osama bin Laden.

But it was all the way back in 1993 that a then classified intelligence memo warned that the very fighters the CIA previously trained would soon turn their weapons on the US and its allies. The ‘secret’ document was declassified in 2009, but has remained largely obscure in mainstream media reporting, despite being the first to contain a bombshell admission.

A terrorism analyst at the State Department’s Bureau of Intelligence and Research named Gina Bennett wrote in the 1993 memo “The Wandering Mujahidin: Armed and Dangerous,” that—

“support network that funneled money, supplies, and manpower to supplement the Afghan mujahidin” in the war against the Soviets, “is now contributing experienced fighters to militant Islamic groups worldwide.”

The concluding section contains the most revelatory statements, again remembering these words were written nearly a decade before the 9/11 attacks:

US support of the mujahidin during the Afghan war will not necessarily protect US interests from attack.

…Americans will become the targets of radical Muslims’ wrath. Afghan war veterans, scattered throughout the world, could surprise the US with violence in unexpected locales.

There it is in black and white print: the United States government knew and bluntly acknowledged that the very militants it armed and trained to the tune of hundreds of millions of dollars would eventually turn that very training and those very weapons back on the American people.

And this was not at all a “small” or insignificant group, instead as The Guardian wrote a mere two years before 9/11:

American officials estimate that, from 1985 to 1992, 12,500 foreigners were trained in bomb-making, sabotage and urban guerrilla warfare in Afghan camps the CIA helped to set up.

But don’t think for a moment that there was ever a “lesson learned” by Washington.

Instead the CIA and other US agencies repeated the 1980s policy of arming jihadists to overthrow US enemy regimes in places like Libya and Syria even long after the “lesson” of 9/11. As War on The Rocks recounted:

Despite the passage of time, the issues Ms. Bennett raised in her 1993 work continue to be relevant today.  This fact is a sign of the persistence of the problem of Sunni jihadism and the “wandering mujahidin.” Today, of course, the problem isn’t Afghanistan but Syria. While the war there is far from over, there is already widespread nervousness, particularly in Europe, about what will happen when the foreign fighters return from that conflict.

The U.S. State Dept.’s own numbers at the height of the war in Syria: access the full report at STATE.GOV