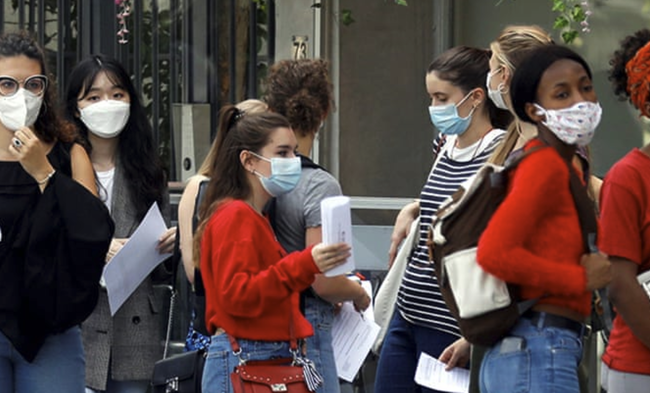 Europe’s coronavirus revival has worsened late this week after surpassing the US in the daily count for the first time on Thursday. Though new cases in the US surged back into the lead on Friday, with 47,643 new cases, bringing the countrywide total to 6,466,012. As we wait for the latest round of data for Saturday, France just reported 10,561 new cases, setting yet another record daily tally since the start of the pandemic, and establishing France as the leader in Western Europe’s renewed outbreak.

Excluding several daily tallies that included cases from prior days, it’s the first time France has seen the number of cases reported in a single day top 10k. The new record was reported Saturday, and covers all cases confirmed during the prior 24 hours.

The previous record, 9,843, was reported Thursday.

Officials have become increasingly concerned about France’s outbreak as hospitalizations have started to climb, though deaths remain surprisingly subdued. France’s death toll has reached 30,910, with 17 deaths recorded in the past 24 hours.

Yesterday, French Prime Minister Jean Castex outlined plans to speed up testing as French citizens complain about long lines. Among other strategies, the government is opening up testing centers in hotspots that will offer priority testing to those with symptoms. Meanwhile, France has reduced the amount of mandatory isolation time to 7 days from 14 for those who have had contact with the sickened. The new number more accurately reflects the time during which patients are contagious, Castex said, himself having only recently finished a quarantine stint after coming into contact with another infected person.

The French government is seeking to avoid a repeat of a nationwide lockdown, though Castex acknowledges the situation is “obviously worsening”.

While France is leading in the EU, the UK on Saturday reported 3,497 new cases of COVID-19, the highest daily tally since mid-May, compared with 3,539 a day earlier. The UK also reported nine new deaths as well. The UK is preparing for a new ban on social gatherings that’s set to take affect on Monday.

Elsewhere in Europe, The Czech Republic and Slovakia also reported record numbers of new cases late this past week as an outbreak in Central Europe worsens.

Finally, as we noted earlier, British clinical trials for the AstraZeneca-Oxford COVID vaccine have officially resumed following confirmation Saturday by the Medicines Health Regulatory Authority that it’s ‘safe to do so’. AZ released a statement celebrating the victory:

“The standard review process triggered a voluntary pause to vaccination across all global trials to allow review of safety data by independent committees, and international regulators,” AstraZeneca said. “The UK committee has concluded its investigations and recommended to the MHRA that trials in the UK are safe to resume.”

Hopes for a COVID-19 vaccine to be approved before the election took a hit last week when AZ stopped trials after one participant showed symptoms of an “adverse” reaction.

In the end, the delay to AZ’s global Phase 3 trials wasn’t very long. But China’s projects still managed to make some important strides in the meantime.