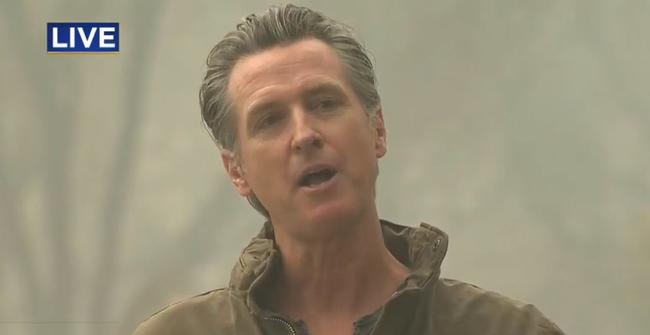 The West Coast is aglow but not in a good way.  Instead, fires are raging throughout California, Oregon, and Washington.  The property damage is appalling, and almost 20 people have already died.

Leftists, predictably, have announced that their goddess, Mother Gaia, is again crying out from the horrors of anthropogenic climate change.

California Governor Gavin Newsom on Friday toured communities devastated by the state’s raging wildfire and knew exactly where the blame was to be placed:

“I’m a little bit exhausted that we have to continue to debate this issue. This is a climate damn emergency. This is real and it’s happening. This is the perfect storm,”

The reality is that there’s something bigger and more real going on, which is the actual climate. La Nina is afoot in the northern hemisphere, and she’s having some extra fun in the West because the environmentalists have prevented California from protecting against fires.

The data from the fires is appalling.  In California, at least 2.5 million acres have burned.  In Oregon, 900,000 acres have burned, with one of the worst fires being attributed to arson.  In a nod to the cliché that everything that happens hits women and minorities the hardest, the Washington Post reports that “[i]n a small Oregon town, a wildfire devastates a Latino community.”  In Washington State, 480,000 acres have burned… and there’s still a month left in the fire season.

Leftists know what’s to blame – it’s Anthropogenic Climate Change, which is the nearest thing they have to a religion.  Religions are unfalsifiable because faith ties all events to a deity.  In that vein, climate change is the answer to all weather and climate events.  Whether it’s too hot or cold, too still or windy, too wet or dry, it doesn’t matter.  The blame always falls on humans and their love affair with fossil fuel.

Therefore, it’s unsurprising that one of the high priests of leftism, Barack Obama, would weigh in on the admittedly disturbing orange sky in California.  In his usual pompous way, he announced that humankind is at fault:

The fires across the West Coast are just the latest examples of the very real ways our changing climate is changing our communities. Protecting our planet is on the ballot. Vote like your life depends on it—because it does. pic.twitter.com/gKGegXWxQu

Others wiser than Obama have pointed out that climate change is not the problem.  Instead, the problem is environmentalism.

Environmentalism is why California stopped grooming forests or doing controlled burns to get rid of deadwood (AKA tinder).  It was because of environmentalism that PG&E poured all of its money into building renewable energy facilities, such as the solar facilities that failed during California’s recent heat wave, and stopped repairing old power lines (some going back 90 years) or trimming back tinder around those power lines.  All this misbegotten environmentalism has controlled California even as more people have moved into fire zones over the past several decades.

Even those awful environmental policies do not tell the entire story.

There are two bigger things at play.

First, there’s California’s actual climate.  For all the hysteria about the epic heat wave this year, back in 1913, the hottest temperature ever recorded on earth was 134 degrees in California’s Death Valley.

Second, the leftists are ignoring the most significant thing of all about California’s furnace-like conditions.  This is a La Niña year, and it’s going to wreak havoc all over America:

La Nina — a phenomenon that occurs when the surface of the Pacific Ocean cools — has officially formed, the U.S. Climate Prediction Center said Thursday. It triggers an atmospheric chain reaction that stands to roil weather around the globe, often turning the western U.S. into a tinder box, fueling more powerful hurricanes in the Atlantic and flooding parts of Australia and South America.

“We’re already in a bad position, and La Nina puts us in a situation where fire-weather conditions persist into November and possibly even December,” said Ryan Truchelut, president of Weather Tiger LLC. “It is exacerbating existing heat and drought issues.”

The effects are already evident. Rising temperatures and an extreme mega-drought across the U.S. West are fueling fires from Washington to Arizona. California is having its worst fire season on record, torching an unprecedented 2.5 million acres. And in the Atlantic, a record number tropical storms have formed by September, including Hurricane Laura, which killed more than a dozen people across the Caribbean and the U.S. last month.

No matter where you are, you’d better batten down the hatches, because anything that can go wild and dangerous with the weather will.  These unusual weather phenomena will have nothing to do with the left’s favorite explanation of Gaia in crisis due to evil people.  Instead, they will reflect normal weather patterns around the globe, including in California.  The only unusual thing will have been the California greenies’ failure to take steps that could protect their state from predictable weather events.