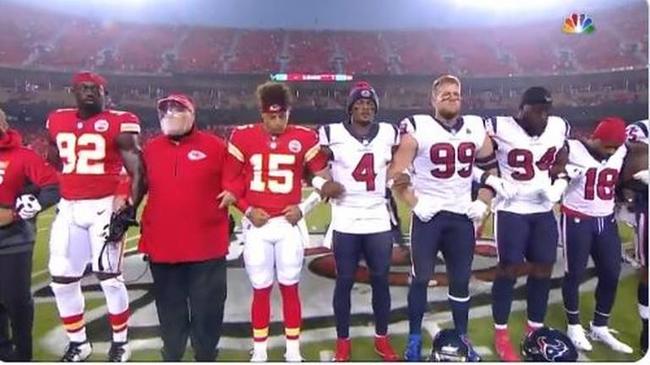 
Who would have thought that sports fans just want to watch… sports?

Thursday night’s return of the NFL which saw the Kansas City Chiefs host the Houston Texans began with an “End Racism” message of unity (words which were also emblazoned at the end of the field).

As Mediaite details, things went downhill despite the special display: “The Kansas City Chiefs hosted the Houston Texans Thursday evening for the NFL’s opening game of the 2020 season, and intended to provide a show of unity by locking arms with their teammates and opponents before the game — but the solemnity of the moment was ruined by fans booing in the stands.”

During the moment of unity between the Texans and Chiefs, some fans responded by booing.pic.twitter.com/qRnle1XiJg

Yes it’s confirmed, not just in this latest booing incident, but Gallup polling shows the Great Awokening of professional sports is alienating many, perhaps most:

This slide in the sports industry’s image comes as professional and college leagues are struggling, and not always successfully, to maintain regular schedules and playing seasons amid the pandemic. Professional football, baseball and basketball games have also become focal points for public displays of support for the Black Lives Matter movement.

And of course the NFL fans present for the Chiefs-Texans game were later subject of media anger and outrage for the boos which were clearly picked up by NBC’s cameras.

Booing a moment of unity is Grade A shamful behavior. What an embarassment. https://t.co/wx3E1ck94p

One editorial haranguing the booing crowd even admitted that the Chiefs later tried to edit the audio in Twitter clips to make it look like there was broad “support” among fans in the stadium for the moment of silence and racial unity display:

All the excuses racists had are now used up. Only one member of the Chiefs kneeled during the national anthem. The Texans elected to stay in the locker room, later joining the Chiefs for a show of support — with both teams earning the vitriol of fans for daring to have a voice.

It was an unmistakable and shameful moment that, try as they might, the Chiefs weren’t able to hide. Whether through editing, or questionable audio work, the team’s official Twitter account desperately tried to present to the world an image of fans in attendance cheering players, not booing.

But again maybe, just maybe, fans are tired of having sports fields and arenas become scenes of endless political debate where “to kneel or not to kneel” has somehow become the prime question, which can make or break a season, or a player’s contract and future livelihood.

My hometown’s got no love for unity? They’re booing unity now?pic.twitter.com/fAN92iqHJv

Or perhaps they also recognize that such corporate sponsored vapid group exercises are intended as minimalist gestures merely to satisfy the PC mob and advertisers.

It seems nowadays that when you purchase a ticket, you should be prepared for part seminar replete with slogans and messaging all around, and part ballgame.

As for Thursday’s game, there’s also the theory that the boos were primarily aimed at the Texans, who took the field slightly late as the “unity” message was already underway:

At Thursday’s NFL season opener, the Houston Texans stayed in their locker room for both the pregame playing of “The Star-Spangled Banner” and “Lift Every Voice and Sing,” which is often called the Black national anthem.

Regardless, it’s not at all what the league expected, and certainly NBC and NFL execs looked on in horror worrying more about the advertising revenue bottom line.

Logitech announces its first mechanical keyboard specifically for the Mac