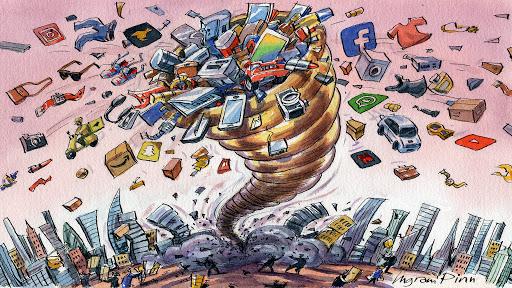 “One believes things because one has been conditioned to believe them.”

Today is the anniversary of 9/11. Please find some time to trade with my former colleagues at BGC/Aurel-Mint who hold their charity day today in memory of the firm’s losses in NY that shocking day in 2001.

This morning we wake to the news the UK has staged something of an economic recovery – but as predicted it’s proving remarkably sticky reopening the economy.  All eyes are still on the tech market – where the bounce proved the ailing cat isn’t in particularly good health. I shall stick my neck out and say the correction still has a way to go. Next week – beware.

Yesterday I wrote about complexity and how the pandemic, bubbles, repressed returns, years of monetary distortion and the evolving political economy have changed the dynamics of markets.  One of the factors causing confusion is the increasing speed of change – it’s happening too quickly for us to fully comprehend.

Today, let me continue the New Reality analysis about dynamics and the speed of change. Rather than focusing on the past and present, let’s focus on the future and the other side of the equation – the outlook for business, industry and government, and how they will influence these changing dynamics.

There are three themes to this morning’s story:

The prospects for the global economy are fantastic! We can look forward to new generation micro-processing which will literally be a quantum revolution. The potential for a clean energy, new battery technologies, environmental improvement, and abundant power from fusion and hydrogen could be enormous. If you think the way we work has changed by “working from home”, the future of AI, Robotics, 3D and nano-tech will revolutionise everything we do and how we spend our increased leisure time. A new agricultural revolution in plants, food and soil will allow us to feed the world, alleviate poverty, raise educational standards and allow population growth to stablise, enabling us all to lead less anxious lives. Ah! Bliss.

Marvellous stuff! The future is going to be flying cars, rocket-packs and holidays on the beaches of Mars… ?

Perhaps. Why not? If try hard enough….

All these things can only happen if the global economy moves forward, develops and evolves. There are massive inertia problems to be resolved. Much of our current economy isn’t fit for purpose. Political leadership seems mired in quicksand. Bureaucracy is perhaps the greatest scourge of the modern age. The blockages, rigidities and hurdles holding back the business of business aren’t getting simpler. They are multiplying.

Not so good… is the future going to be like the Vogons currently running financial regulation?

How will it happen?

The role of government will be critical. The future of the global economy will depend on the delivery of functional physical and social infrastructure to enable change and evolution. That means breaking out of our current gridlocks, including inequality, and completely rethinking and remaking public goods like health, welfare and education and an acknowledgement that social justice and wealth-equality aren’t optional.

I don’t think I need to say too much about the possibility of a bright Tech-led future – what matters is getting there, or as close to it as possible. As a Porridge reader recently reminded me: 15 years ago there were no smartphones, no social media, no Uber or Airbnb, Apple and Amazon were struggling and GE was AAA rated. The world changes.  Get over it.

Let’s start with the third issue – The role of government.That’s an immediate problem for my generation. We’ve been brainwashed since infancy to believe government is bad, less government is good. Big G is inefficient and leads to bureaucracy. Any Government spending will be riddled with featherbedding, inefficiency and outright corruption. Far better to let private enterprise lead the way – so we’ve always been told.

Really? Private Enterprise isn’t much better. Let’s be honest – big firms have their brief periods of innovation, stratospheric growth and market leadership before they stumble into middle age, become sclerotic and die from obsolescence, competition, null-entropy and bureaucracy – that’s the Darwinian process of capitalism. The last thirty years spent worshiping at the Friedman Temple of corporate shareholder capitalism has seen some pretty shady behaviours  – massive executive rewards, stock buy-backs and the overleveraging of failing companies to pay out private equity owners…. I could go on.

There is a middle ground.

What if Maggie Thatcher was utterly wrong about Government having to be as frugal as a housewife? What if fiat money and monetary sovereignty works? What if Milton Friedman was wrong and Keynes, Smith et al are all right?

Yesterday I raised the issue of stakeholder capitalism – and predictably got a number of emails telling me anything except the continued wealth creation by successful entrepreneurial billionaires will lead to disaster and communism. That’s not what a stakeholder economy needs to lead to.

Shock Time. For the first time ever, I am going to say something positive about ESG – Environmental, Social and Governance Investment parameters.

For too many investors ESG is simply an easy tick-box approach to avoid difficult compliance or investment committee questions. But ESG is still at an early stage as we evolve towards Stakeholder Economies.  Investments that aim to do good are laudable, but ones that are properly managed, do good and socialise the benefits are even better, especially when they also make profit!  (Sharing the money around is the issue for unreformed capitalists..) Few big banks or investors would publically admit ESG is bad – so how can Stakeholder be bad?

The big issue is can Government be trusted to deliver the public goods we will need to deliver our Bright New World? Can they be trusted to use the magical money tree of MMT to deliver the necessary reforms of health, education and welfare provision, solve inequality and rebuild ailing national infrastructure. That’s a question for functional democracy.

One of the comments I got yesterday – from a leading academic – sums up the risks: “It’s as simple as this – unless you are the EU, which has zero monetary sovereignty, nations can solve all the issues you identify, including social and income equality, through focused MMT spending. Unless you are in the US, where the government has created some $670 bln and given it straight to the richest 1500, while 47 million and one in three kids still go hungry.”

It’s a warning – MMT is a potential solution. But a dangerous one if misapplied. If the resources of a state, and its control of fiat currency, are directed to support only the rich and powerful – explain to me what’s different from what they complain Communist China is guilty of?

Let’s be more optimistic. the future looks bright and perhaps we can better resolve issues by adopting Stakeholder Capitalism. We can fund it all by selective government MMT programmes to finance public goods enabling us to do these things. Sounds easy – but perhaps it is? We need Decent politicians – note the capital D. Decent as in decent, honest, brave and true.

Which leads us to the Big Problem, the second issue… the trend towards stultifying Bureaucracy.

One of my favourite economic concepts is “Niskannen’s Theory of Bureaucracy”. Bureaucrats are driven by economic goals – which include making their lives easier, and controlling more and more makes it easy. It’s not just a government problem. Its rife across the private sector. Let me start by asking… have you spoken to your bank recently?

Probably not. I bet you spent hours in a telephone queue, being told that “due to the Pandemic we are experiencing a high volume of calls”. I read the high street banks are sacking more staff and closing more branches.

Because it makes sense to borrow money at negative real interest rates I recently applied for a mortgage – to finance rebuilding our house. We have money in the bank, and they are aware of our investment portfolio, pensions and other savings. However, they turned me down for a loan – on the basis I had a black credit mark.

It turns out that black score is because a mobile telephone company made a mistake and reported I hadn’t paid them the horrendous sum of £66.30. EE have now acknowledged the mistake and apologised for not cancelling a direct debit. I have a cheque on my desk from them repaying the direct debits they claimed before I cancelled it. However, they say that “legally” they can’t undo the damage done to my credit score. They say the law demands it stays on my report for 2 years – despite it being patently incorrect.

I asked the bank to be reasonable and look at the information. “Computer says No.” The Bank doesn’t want to lend to me, or anyone else, full stop. The telecoms company can’t be bothered to correct their mistake and raise potentially difficult questions about their systems.

Let’s focus on why banking bureaucracies fail. If a high-street bank lends money that causes all kinds of problems – if has to fill in sheaves of client reports, update their KYC, determine why someone with money in the bank wants to borrow more. They then will have to discuss the loan at half and dozen different compliance, diligence, diversity and capital committees. Then they have to weigh the risk of default, and put aside the correct capital charges to apply. Being “Pale, Male and Stale” doesn’t help – I might retire at some point in the 10-year life of the loan. Banks definitely don’t want to be lending to white-folk in their 60s.

Effectively the big banks no longer function.  They have become bureaucracies where the treacle that flows through their operational arteries has made them ineffective and useless. They are still using multiple legacy systems, but don’t have the energy and won’t allocate the cash to replace them.  Yet these same banks are considered critical to the economy and will be bailed out repeatedly, confirming their criticality to the economy.  Their executives are paid in millions.

Let the Big Banks go bust – that’s what should happen to failing companies!

Actually, go further – close them down.  The financial system will not collapse if we put HSBC up against the wall. I would argue it would be a great “pour le encourage les autres” moment.. (“The English like to shoot an Admiral or two to encourage the rest”, as Voltaire said.) While we are it, lets put EE up against the wall as well, and blindfold a couple of credit agencies as well…

A bit of corporate fear would be no bad thing.

I think you get the drift…. Extend the same thinking across the whole economy and every government department. A little bit of good old creative capitalist destruction wouldn’t do us any harm.