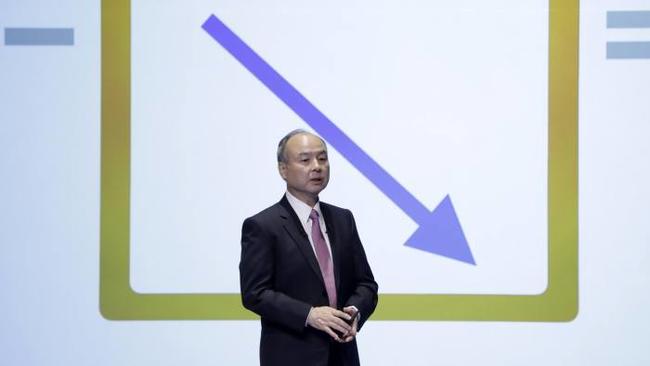 
Earlier this week, when citing a little noticed Aug 26 conference call held between Morgan Stanley and SoftBank, we reported that the Japanese financial conglomerate had already closed out most of its infamous public investments, which also included various associated derivative strategies that caused much market havoc last month when the market was swept up in a historic “gamma crash up”, whereby the VIX rose as the S&P rose, and where stock prices and calls were caught in an unprecedented feedback loop that led to every higher prices and ever more call buying.

As a reminder, this is what a SoftBank IR satffers told Morgan Stanley: “We spent $10 billion on public equities and have already sold $7 billion of them. We consider this “treasury operations” where we are buying very liquid operations to earn higher returns on our cash.”

This, of course, followed a market storm following the revelation (first here, then elsewhere), that SoftBank had been turbocharging the returns on its brand new investment management subsidiary…

… which had been investing in public equities which were first disclosed in August and included some of the highest beta/momentum stocks including the FAAMGs and various other tech names, including Tesla…

… by buying OTM calls, a strategy which according to press reports netted SoftBank some $4 billion in profits, an amount roughly equal to what it had spent on option premium – a remarkable return.

Surprisingly, the investing public was not impressed. Amid our report that SoftBank’s public trading strategy had been spearheaded by a former Deutsche Bank prop trader and derivatives guru, Askshay Naheta, who subsequently went on to generate even more remarkable returns at his hedge fund Knight Assets  (where he was focused on “arbitrage and value investing“), both retail traders and institutions were puzzled: was SoftBank a venture capital investor in private companies or was it morphing into a hedge fund?

The result was a furious selloff in SoftBank stock which at one point lost 17% of its market cap in the days after the  derivative strategy became public.

Naturally this dramatic loss in SoftBank value was not lost on its CEO, Masa Son, who like Trump, has been for years been laser focused on the stock price of SoftBank going so far as to remind investors at every earnings call that SoftBank’s stock buyback is the world’s second biggest only behind that of Apple.

Fast forward to today when Bloomberg reports that SoftBank is considering revamping it “controversial strategy” of using derivatives to supercharge returns on its investments in public tech, and has sent out executives to meet with investors in recent days “to assure them that the bets are relatively conservative.”

Or, as Bloomberg puts it, “the collapse in shares has caused Son to reconsider continuing the trading strategy, but it is not clear what changes might be made.”

Indeed, while it wasn’t immediately clear how SoftBank would ‘revamp’ its strategy which ended up generating stellar short-term returns on its public stock investments, the Japanese conglomerate “stressed to investors that its billion-dollar positions have been concentrated in a handful of blue-chip tech companies, including Microsoft Corp. and Facebook Inc.” and have involved call spreads rather than highly leveraged short-term bets”, the Bloomberg sources reported.

And yet, SoftBank’s attempts to ease investors concerns that SoftBank was transitioning into a option-trading hedge fund would only go so far, because as Bloomberg also adds “despite debating internally whether to disclose more details of its derivatives trading, Masayoshi Son has been reluctant to provide more information.”

In addition to concerns about its strategic shift, the report also notes that investor scrutiny “follows another controversial trade by SoftBank, which used complex securities to offload exposure to the now-collapsed German payments company Wirecard AG.”

Of course, regular Zero Hedge readers know all this: as we reported earlier this week, the brain behind SoftBank’s WireCard strategy was none other than Askhay Naheta, the man who currently helms SoftBank’s public investment fund (although for unknown reasons, Masa Son refuses to point this out). To wit:

Askhay was also the brains behind another infamous SoftBank trade: the $1 billion “structured equity” trade in WireCard. In a nutshell the trade consisted of a €900MM investment from SoftBank Investment Advisors in April 2019, at which time SoftBank said it would pursue a “strategic co-operation agreement” with Wirecard giving the impression that one of the world’s most powerful technology investors was forging a deep business relationship with the German company and inspiring confidence in its shares. But the day after SoftBank formally signed the strategic tie-up with Wirecard in September, SBIA cut its exposure to the German payments group through a sale of new bonds exchangeable for the payments company’s stock. As the FT reported, “Bankers at Credit Suisse sold the €900m debt instrument to a broad group of investors, which essentially allowed SBIA to fund its entire investment without putting in a cent of its own money, while also gaining tens of millions of upfront cash profits.”

Anecdotally, a similar “costless” strategy was applied by Askhway when he started buying call spreads on the handful of tech names that SoftBank had invested in. What Askhway did not anticipate, however, is that coming at a time of supercharged retail option trading in the summer doldrums of August, SoftBank’s strategy was sufficient to prompt an unprecedented surge in both single stock and Nasdaq implied vol, which ultimately were the clues that led to SoftBank’s outing as the Nasdaq whale.

To be sure, while we still don’t know the specifics of SoftBank’s trades simply because the bank refuses to disclose them so we can only guess, it appears that the combination of SoftBank’s “whale trades” coupled with Robinhooders who have been buying up calls like mad in recent weeks, and accentuated by the frontrunning of such option trades by HFTs who have been frontrunning Robinhood trades, ended up culminating in the perfect storm that sent the Nasdaq, the S&P500 and all the FAAMG stocks to all time high at the start of the month… only to culminate with the fastest ever correction from an all time high in history, as it emerged that the gains were not on anything fundamental or tangible, but merely on a historic “gamma squeeze.”

Which begs the question: with its strategy of call spread buying now conventional knowledge, will SoftBank do it again? And, just as importantly, after having closed out most of its public positions, just how much exposure to the capital markets does SoftBank still have? The reason we ask is because all those dealers who were caught in the August gamma trap, would be delighted to gang up on the Japanese hedge fund VC conglomerate and return the favor, taking the other side of its positions and forcing it to liquidate at substantial losses, which of course will be impossible if SoftBank is already out of most if not all positions.