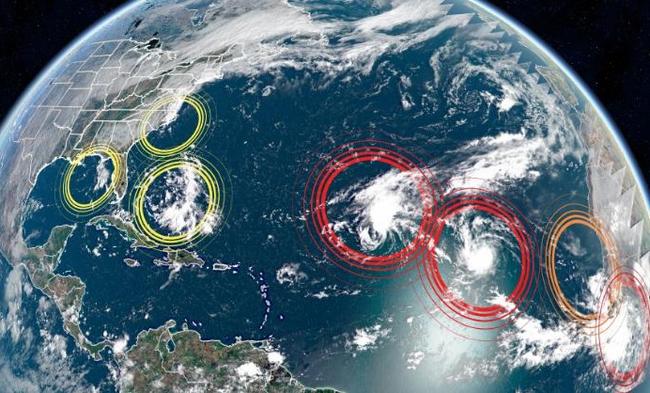 
Readers may recall, on Thursday, we outlined the La Nina weather pattern has likely been the culprit behind dangerous wildfires in the western U.S., and, as we highlighted as early as Aug. 13, the ‘super active‘ hurricane season.

As Bloomberg describes, La Nina “triggers an atmospheric chain reaction that stands to roil weather around the globe, often turning the western U.S. into a tinder box, fueling more powerful hurricanes in the Atlantic and flooding parts of Australia and South America.”

While we have covered the wildfire situation in the western U.S. – it’s now time to turn our attention back to a meteorological dilemma developing in the Atlantic basin.

“This is what September 10, the peak of the hurricane season, looks like! We are monitoring 7 systems in the Atlantic, including Tropical Storms Paulette and Rene. The tropical waves in the eastern Atlantic have the highest chances of formation,” NHC said in a Twitter post.

Two of the disturbances are named storms, called Paulette and Rene, are both traversing the central Atlantic Ocean heading west-north-west. The other five systems are described as disturbances that have yet to become storms but should be watched carefully over the next five days. Three of the disturbances, located on the map below, are highlighted in yellow, situated near the U.S.

The Atlantic hurricane season tends to peak around Sept. 10, but with La Nina conditions formed, it suggests the back half of the season could remain very active.

“Typically, what ends Atlantic hurricane seasons is that vertical wind shear gets too strong,” said Phil Klotzbach, a research scientist at Colorado State University, who spoke with CNN. “So, El Niño, via its impacts on vertical wind shear, has a stronger impact on September and especially October hurricanes than it does on August hurricanes. With La Niña, vertical wind shear tends to be lower, and consequently, we end up with more active late seasons.

Some are likening this year’s La Nina as the ‘La Nina from hell.’