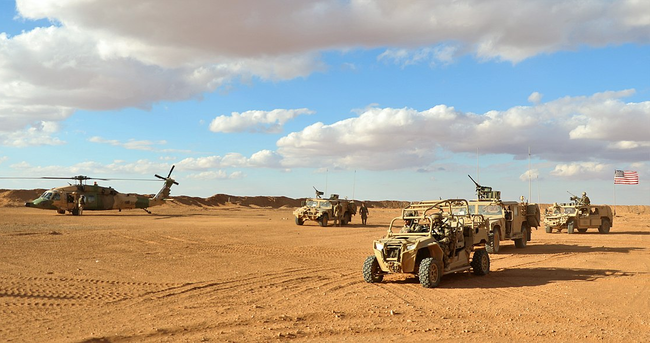 The U.S. Al-Tanf Zone in southeastern Homs has once again been used by the Israeli Defense Forces (IDF) to bomb an area in Syria, a source in the Syrian Arab Army (SAA) in Damascus told Al-Masdar News.

According to the source, missiles fired from the Al-Tanf area targeted the town of Al-Safira in southern Aleppo, resulting in a number of explosions and at least two deaths, with Reuters later citing seven killed.

The source said a number of missiles targeted the the Scientific Studies and Research Center (SSRC), with a few managing to hit the facility (part of a network of government facilities previously accused of being behind Syria’s chemical weapons capabilities).

He would add that the building suffered damage, but it is believed to be minimal at this time.

The U.S.-led Coalition contends that they are using the Al-Tanf Zone to prevent the Islamic State (ISIS/ISIL/IS/Daesh) from returning; however, it is the Syrian Army that has solely faced ISIS in the Homs Governorate.

Thursday night’s attack by the Israeli Defense Forces marks the second time this month and the third time in the last two weeks that they have targeted a site inside of Syria.

The previous attacks targeted the T-4 Airbase in Homs and the Damascus International Airport area.

The attack last night hit the town that has the largest Iranian presence in northern Syria; it has been used by the Islamic Revolutionary Guard Corps (IRGC) to coordinate with its allied forces in Aleppo and the Idlib countrysides.