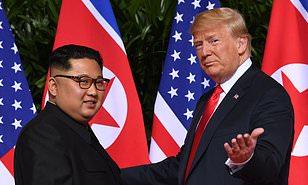 
Two-and-a-half weeks ago the UK Sun as well as New York Post set off the latest round of rumors suggesting North Korean strongman Kim Jong Un was on his way out due to rapidly deteriorating health.

The NY Post went so far as to say recent appearances were “fake” after he fell into a coma, and that his increasingly visible sister, Kim Yo Jong, is in the process of taking the reigns of power. “North Korean leader Kim Jong Un has been in a coma for months and all his recent public appearances were faked, a South Korean official says in a new report about the reclusive despot,” the Aug.24 “bombshell” report said.

But given it was something like the 58th “coma” or “death” report for Kim over the past few years, most remained highly skeptical, chalking them up to the ash heap of past similar rumors and fake news. And now President Trump in a rare acknowledgement has directly weighed in with a Thursday morning tweet:

Kim Jong Un is in good health. Never underestimate him!

Two weeks ago, a mere days after the initial reporting saying he had supposedly been in a coma “for months” (and to the embarrassment of those pushing the initial false reports), Kim appeared at a Workers’ Party meeting in preparation for a looming typhoon, according to North Korean state media.

He was also more recently photographed inspecting damage from the typhoon in the aftermath.

International reports also said the meeting he chaired dealt with the coronavirus pandemic, which Pyongyang has been accused of greatly downplaying the extent of inside the country.

It’s unclear whether Trump’s Thursday tweet confirming the North Korean dictator is alive and well sprang from public reporting or perhaps based on intelligence, or even personal communications. Concerning this latter point, nuclear talks have been stalled and appear to be significantly hampered since late last year, and after Pyongyang conducted a series of provocative short and medium range missile tests over surrounding waters including the Sea of Japan.