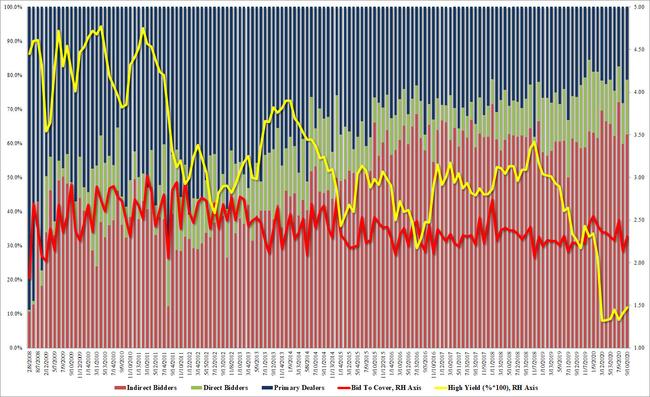 
After an average 3Y auction, and a subpar 10Y reopening yesterday, moments ago the Treasury completed its sale of coupon bonds for the week when it sold $23 billion (down from $26 billion last month) at a high yield of 1.473%, which was the highest yield on the 30Y since February, although stopping through the When Issued of 1.476% by 0.3bps, demand was stronger than in recent auctions at least superficially.

The internals were a tad weak, with Indirects taking down 62.6%m which while above the 59.8% last month was below the recent average of 66.0%. And with Directs taking down 16.1%, the highest since February, Dealers were left with 21.3% just below the 22.6% six auction average.

Overall, another average auction although the lack of a tail was taken as positive by the market, and helped the 10Y yield dip from an unchanged, 0.70% by 1bp to 0.69%, a move which makes sense as stocks are taking on water.