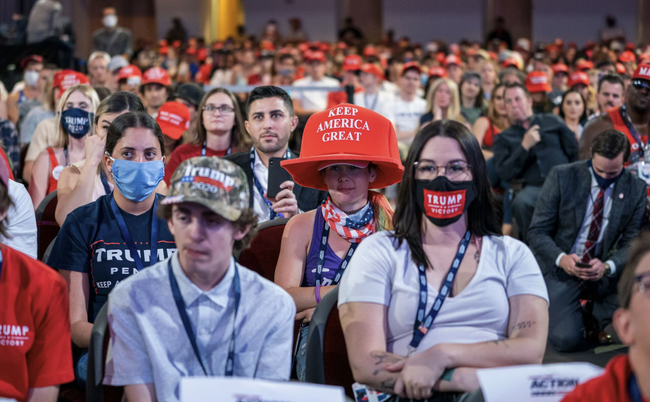 
If there’s one skill the mainstream media has mastered in the “Age of Trump”, it’s pushing a coordinated narrative. To mark the passing of the Labor Day holiday and the arrival of presidential campaign mania, the mainstream press is trying to paint a picture of a Trump re-election campaign in disarry. Late last week, and over the long weekend, the dominant story was a set of polls that were overwhelmingly spun as a positive for Biden, though Trump saw gains in Texas and several swing states.

But as we learned in 2016, the polls aren’t always accurate.

Last night, the NYT published a length piece reporting on the Trump campaign’s lavish spending, which has coincided with a massive surge in late-stage fundraising for Joe Biden. The former Veep raised a record $364.5 million in August. While Trump beat out Biden as recently as July, most believe Trump’s numbers likely won’t top Biden’s for August.

To be sure, Trump is also seeing a slowdown in cash flow as donors like Sheldon Adelson, upset over Trump’s aggressive China policy, which he says has cost him millions, decide to sit out the rest of the race, Trump is reportedly contemplating something he probably once hoped he wouldn’t need to even consider: Injecting another massive slug of his personal fortune into the race.

Team Trump has reportedly already spent $800 million including on Superbowl ads demanded by Trump. That’s more than 2/3rd of the $1.1 billion raised so far. Given the stakes for Trump, not just politically but personally and financially, the fact that he’s reportedly considering injecting another $100 million of his own money (he spent $66 million in 2016), as Bloomberg claimed Tuesday morning, isn’t exactly a surprise.

The campaign has officially refused to comment on the possibility of such a large personal contribution from a sitting president, which Bloomberg claims would be “unprecedented” in modern American political history.

President Donald Trump has discussed spending as much as $100 million of his own money on his re-election campaign, if necessary, to beat Democratic nominee Joe Biden, according to people familiar with the matter.

The billionaire president has talked about the idea with multiple people, though he hasn’t yet committed to any self-funding, according to people briefed on internal deliberations. Though Trump personally contributed $66 million to his 2016 campaign, it would be unprecedented for an incumbent president to put his own money toward winning a second term.

Trump has sought advice about whether he should self-fund as he scrutinizes heavy spending by his team earlier this year that failed to push him ahead of the former vice president in the polls. In addition, Biden’s campaign and associated Democratic entities have recently raised more than Trump and his allies.

Tim Murtaugh, a Trump campaign spokesman, declined to say whether there’s been any consideration of using the president’s personal fortune to help fund his re-election effort.

“President Trump’s fundraising is breaking records and we are paying close attention to the budget, allowing us to invest twice as much from now until Election Day than we did in 2016,” Murtaugh said in an email. “President Trump has also built the world’s greatest digital fundraising operation, a dominant ground game, and a third advantage Joe Biden can never match — enthusiasm.”

Of course, if President Trump has shown us anything so far, it’s that dollars don’t always equal votes. The strength of a candidate’s messaging and reputation are also important.

Hillary Clinton outspent Donald Trump by nearly two to one (1.18 billion U.S. dollars to 616.5 million) but lost in the Electoral College.

Total spending on the 2016 presidential race was a staggering 2.4 billion dollars, according to the campaign finance watchdog Open Secrets. That sum would cover the average salaries (~65k) of over 30,000 nurses for a year in the United States.Nicholas Everhart, a Republican strategist who owns a firm specializing in placing political ads, said the $800 million spent so far shows the “peril of starting a re-election campaign just weeks after winning.”

“A presidential campaign costs a lot of money to run,” Mr. Everhart said. “In essence, the campaign has been spending nonstop for almost four years straight.”

Of course, as the NYT points out in the closing paragraphs of its lengthy expose about the Trump campaign’s money problems, the campaign has been saddled with “unusual” costs, like tens of millions of dollars in legal bills fending off myriad investigations spawned from “Operation Crossfire Hurricane”.

Republicans, for instance, have been saddled with extra legal costs, more than $21 million since 2019, resulting from investigations into Mr. Trump and, eventually, his impeachment trial.  The R.N.C. also paid a large legal bill of $666,666.67 to Reuters News & Media at the end of June. Both Reuters and the R.N.C. declined to discuss the payment. It was labeled “legal proceedings — IP resolution,” suggesting it was related to a potential litigation over intellectual property. The NYT also blamed President Trump’s “mercurial” personality for the $325k deposit paid to a Jacksonville convention center during the uproar over the RNC, when Trump demanded a change in venue.

Team Trump and its affiliate organizations like the RNC haven’t released August fundraising number yet. Expect another round of gloating, unless the campaign truly does knock it out of the park. The violent protests that have swept the country could be one inspiration. In the polls, Biden’s lead nationally looks comfortable, but when i comes  to swing states, it’s within the margin of error.