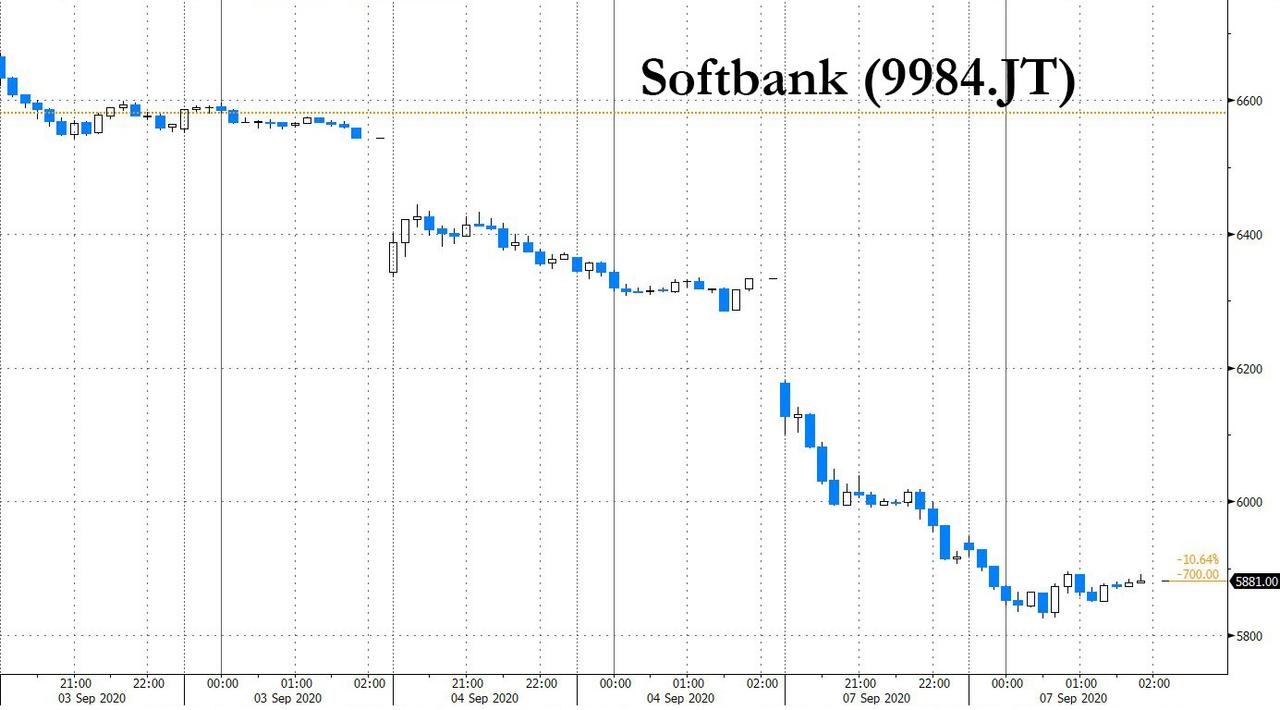 SoftBank Has Closed Most Of Its “Nasdaq Whale” Positions

Following our Thursday report identifying SoftBank as the primary – but not only – catalyst behind the bizarre moves in high beta tech names and the broader market over the past several weeks (confirmed later by the FT and WSJ), an odyssey which we summarized in “Connecting The Dots: How SoftBank Made Billions Using The Biggest “Gamma Squeeze” In History“ with subsequent reports that SoftBank, or the “Nasdaq whale” as some now call it was sitting on “unbooked” profits of about $4 billion, the market was quick to punish SoftBank (9984.JT) which dropped on Friday then tumbled another 7% on Monday despite what the company has been proud to frequently remind its investors was the second biggest buyback authorization after Apple.

There were two reasons cited for the drop: the first was the realization that “SoftBank’s behaviour as a company increasingly resembled that of a hedge fund, populated with former investment bankers with a massive appetite for risk.” This realization was assisted by our weekend report which revealed the main players behind the Softbank trade, which was the brainchild of Abu Dhabi-based Akshay Naheta, a former Deutsche Bank prop trader who now heads SoftBank’s new asset management team which invests in public equities, including all those tech companies that have soared in August on the massive gamma melt-up facilitated by concurrent call buying as described previously.

The second reason cited by the FT for today’s tumble is that “retail investors, which make up 30 per cent of SoftBank’s shareholder registry, reacted particularly negatively to the company’s latest shift in investment strategy.”

“For institutional investors who understand how options trades work, many don’t anticipate a major impact on SoftBank’s earnings,” said Naoki Fujiwara, a fund manager at Tokyo-based Shinkin Asset Management. But he said retail investors “are worried the derivatives trades will lead to major losses again.”

Which is understandable: while it is known that SoftBank has made a roughly 100% profit generating $4 billion in profits from the purchase of $4 billion in option premium, it was generally unknown if the bank can hold on to this profit, or in other words if it can book it before dealers move the market aggressively against SoftBank, potentially leading to all gains being wiped out and/or losses. Indeed, this is what the FT reported just this morning:

While SoftBank’s huge derivatives bet on selected US stocks has worked for now, leaving the Japanese group with large, albeit as yet unrealised, profits, a continued pullback in equity markets could erode returns.

Well, it appears that in keeping with its newly-found reputation of a hedge fund, and contrary to widespread speculation that the Japanese conglomerate is still on the hook, SoftBank has already unwound a majority of its public holdings.

We know this thanks to a little-noticed conference call that took place in late August, days before we revealed SoftBank’s role in the marketwide gamma grab. The call, which took place on August 26 and was held by Morgan Stanley’s media sector specialist covering SoftBank and was first noticed by Thunderdome Capital, emphasized several things:

But most importantly, the call touched on the biggest topic in capital market in the past week: the fate of SoftBank’s public investments, with the following striking disclosure:

“We spent $10 billion on public equities and have already sold $7 billion of them. We consider this “treasury operations” where we are buying very liquid operations to earn higher returns on our cash.” 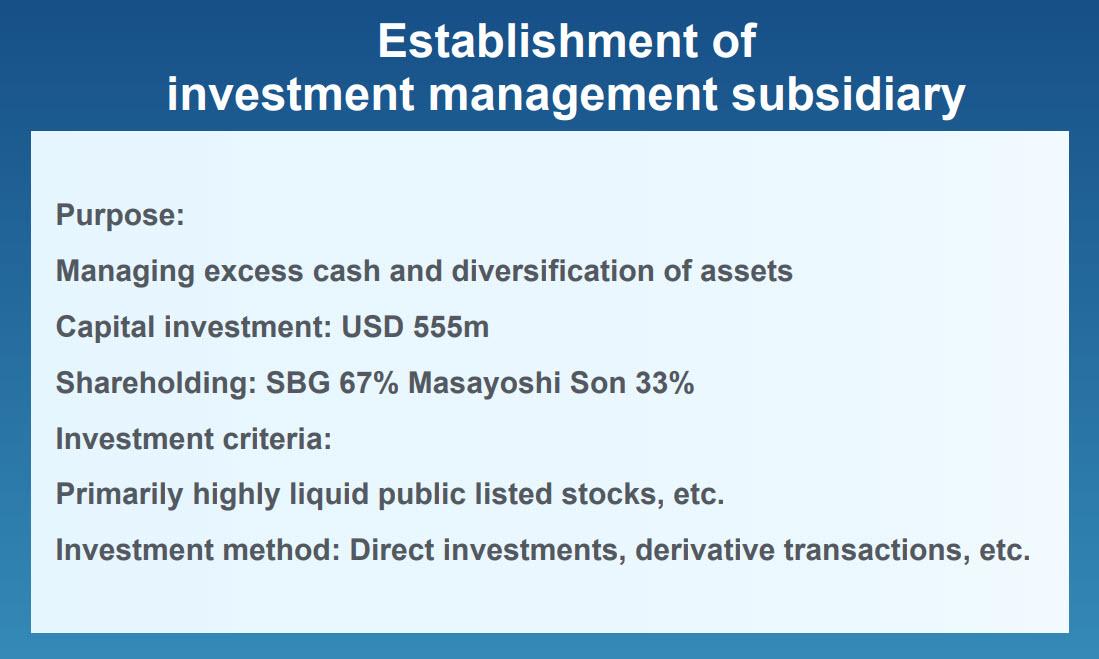 … and specifically to the portfolio of public investments which SoftBank unveiled recently (highlighted below) and then used various option strategies to turbocharge returns during the now infamous gamma meltup. 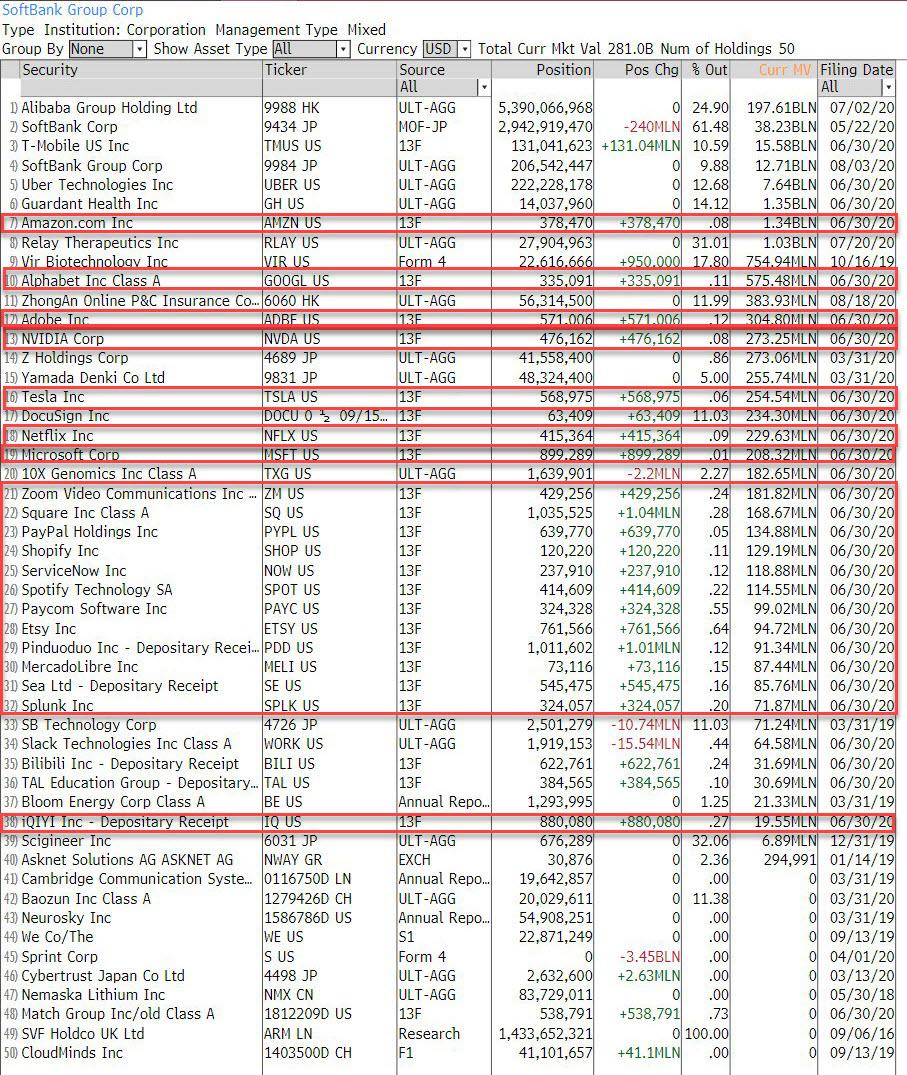 It also means that for all intents and purposes, SoftBank is now out of most – if not all – of its public equity positions and “Nasdaq Whale” bets which were, as we reported last week, the primary catalyst for the market’s tremendous rally.

Then again, even without the benefit of this conf call, one could see that SoftBank was mostly out of its controversial public stock positions through the market’s action into Thursday and Friday, when all the beneficiaries from the gamma grab were hammered.

As we first discussed late last week, and as the BearTraps report wrote over the weekend, “the sell-off on Thursday and Friday was clearly a ‘gamma-squeeze-unwind’, in our view. Dealers had to buy tech stocks and Nasdaq futures throughout March to hedge the rising prices of call options (which they were short). Ahead of the Fed meeting, Maso Son likely took off a chunk of his long call position early Thursday we are told.”

So once the calls option prices stopped rising, market makers furiously reversed their gamma chase and had to take down their hedges, dumping significant amounts of stock they had delta-hedged as gamma was surging back into the market, and so on: “as the delta on the calls they sold came down Thursday, dealers were forced to sell stock, and reset hedges lower”

And speaking of market whales, besides SoftBank there is also the Fed to consider, and as Larry McDonalds writes, “if the Fed had the chance to let some air out of the Nasdaq bubble without disrupting financial conditions (overall cost of capital), they would do it in a second.” He then points out the chart below which shows a “highly unusual divergence” between Nasdaq vol and the broader Goldman overall financial conditions index, and which “speaks to the Nasdaq Whale’s volatility juicing influence on the Nasdaq, without leaking over to credit markets” and as a result Powell is smiling. 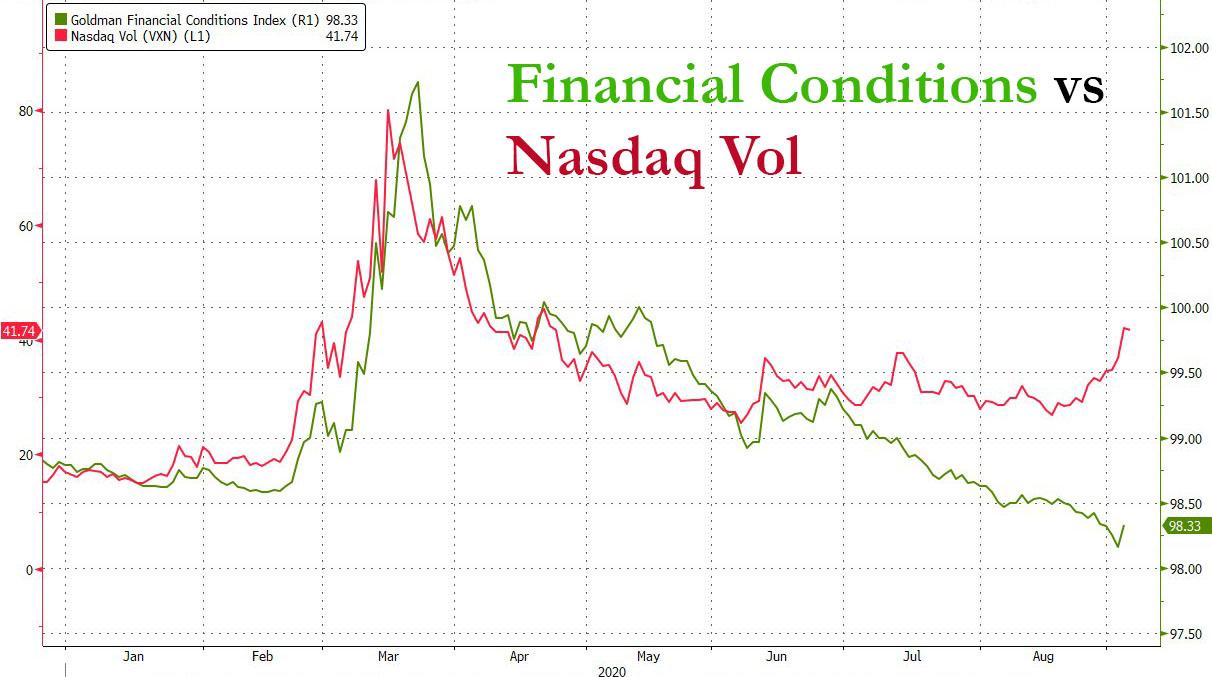 And yet, McDonald believes that “the Fed is getting a bit nervous about the Whale’s splash though, Nasdaq froth. The FOMC’s reticence to hint at more QE candy combined with the mentions of macroprudential financial stability and leverage – indicates they are worried”  but not enough to overcome their fear of tightening financial conditions. In other words, in the Bear Traps Report’s view the Fed “would like to send a message to Masa Son. A little high heat is in order, “chin music” as they say in the big leagues, as long as they do not push FCIs tighter (financial conditions).”

Whether the Fed will teach Masa Son a lesson is unclear, but what is certain is that SoftBank is now clearly out of the picture when it comes to fmenting a gamma melt up. In fact, one can virtually assure that any further attempts to prompt a marketide gamma squeeze will be summarily punished by dealers who are now left with excess high beta stocks which they loaded up on amid the delta-hedging frenzy and now have to dump. In short, the path of least resistance in the coming day is down, not up.

While institutional investors will take this in stride, this will be a major problem for retail daytraders who since March have enjoyed a tremendous ascent in stocks and may be about to see their major test of their convictions (something bitcoin weak hands clearly failed over the weekend as the cryptocurrency space simply imploded).

Meanwhile, with elections looming, further risk-on will demand more QE, and will threaten the Fed’s credibility unless it gets it. Unless, of course, as McDonald concludes the Fed wants banks to retain capital and fudging some level of credibility gives banks a steepener (yield curve) to play with.

Finally, recall that it was last August when former NY president Bill Dudley wrote an Op-Ed urging the Fed to crash the market to prevent another Trump re-election. Well, if his message resonated with the FOMC, what better time to unveil a hawkish shock than at the Sept FOMC meeting in 9 days – the last one before the presidential election. Because if there is one thing that – in Dudley’s and Trump’s view – could cripple his re-election chances, it is a market crash just weeks before Nov 3.