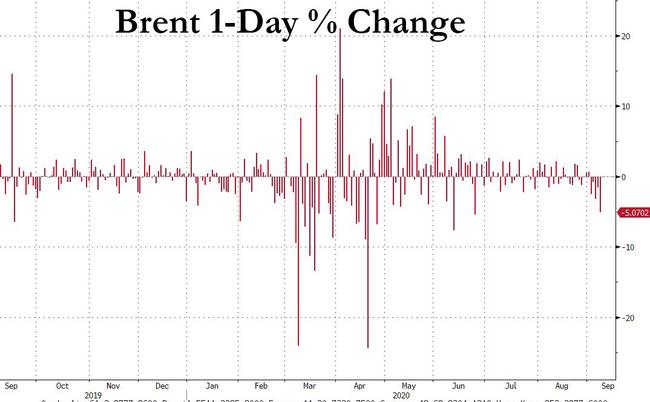 
With growth stocks getting pummeled, one would think that there is at least some rotation out of growth and into value sectors. Alas, one would be wrong, because the core commodity behind so many “value” strategies, oil, is plunging even more than the Nasdaq, with Brent tumbling below $40 for the first time since June…

The drop was sparked by concerns about waning Chinese demand with only four of 10 Asian refiners surveyed by Bloomberg saying they would try to buy more Saudi Arabian crude after the kingdom cut pricing for October as consumption remained below pre-virus levels. Abu Dhabi National Oil Co. also cut prices on Tuesday, the latest response to a sluggish demand backdrop in the world’s biggest oil-consuming region.

“Today’s oil-price move is a clear sign that the market now seriously worries about the future of oil demand,” said Paola Rodriguez-Masiu, senior oil markets analyst at Rystad Energy AS.

Other bearish factors noted by Bloomberg include the end of the U.S. summer driving season and more supply from the OPEC+ alliance. In addition to the plunge in spot prices, Brent’s three-month timespread is nearing the widest contango since late May, “an indication that concerns about oversupply are returning. Equity markets were also weaker on Tuesday, adding to crude’s losses.”

The growing contango in both Brent and WTI, combined with the near record plunge tanker rates, will likely spark another round of loading up oil in floating storage. Storing crude at sea has become profitable again for northwest Europe and the Mediterranean, shipbroker and exchange data compiled by Bloomberg show.