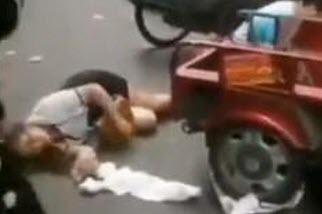 
In what may or may not be damage control from Tesla, the CCP – or both – Tesla is suddenly reportedly setting up a new sales and service company in Southwest China, according to a Tweet by state-owned Global Times.

The service center is being set up in Yunnan Province and will include “car sales, second-hand car dealing and vehicle maintenance” according to the Tweet.

The report of $1 million being deployed to fund this service center in China comes just hours after the Global Times had “raised doubts” over the the car’s functions and quality, following horrifying video of a crash aftermath in Nanchong City.

Global Times’ article yesterday offered an update of the crash, confirming that the car was reportedly being driven by a 51 year old woman and the accident resulted in 2 dead and 6 injured. The possibility of drunk driving and driving under the influence of drugs had been excluded, according to the report. Media outlets claimed that “the car had gone out of control”.

By raising the issue, The Global Times seemed to have possibly given a nod that the government could be concerned as to the origins of the accident. “Some netizens suggested that the driver had made a mistake, but others doubt the effectiveness of Tesla’s autobrake and intelligent driving functions,” the article said.

Tesla cars have reportedly been responsible for several accidents in the past three months, according to a report from autoju.com. On August 17, a driver from Wenzhou, East China’s Zhejiang Province, said his Model 3 suddenly sped up and rushed into the parking lot, damaging about a dozen cars. He also noted that the car’s brake was not working. Another driver from Hangzhou also reported in May that her Tesla once accelerated for no reason.

Recall, it was only hours after Consumer Reports posted a scathing review of Tesla’s Full Self Driving option that video surfaced on Twitter of what was claimed to be Shuangfu Street in Nanchong City, the scene of where a Tesla allegedly “ran out of control and crashed into multiple cars.”

The videos appended to the Tweets appeared to show bodies strewn throughout the street, police on the scene and concerned onlookers.

The videos painted a disturbing scene, showing what appear to be lifeless bodies on the street in the aftermath of the event. The video also clearly shows a wrecked black Tesla Sedan, which appears to have rear ended a parked car.

The best dating sites for me