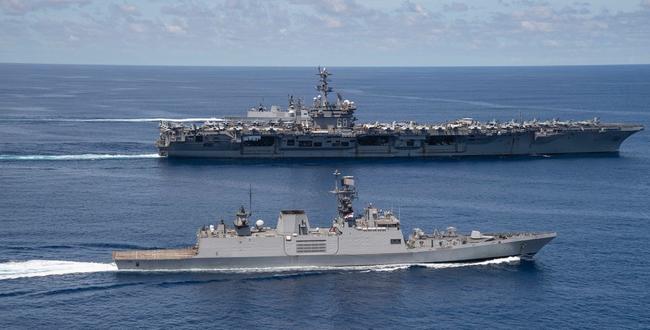 
The US Navy’s Fifth Fleet, which operates out of the Middle East and Persian Gulf region, has announced that a massive search is underway for a missing sailor in the Arabian Sea.

The sailor is detached to the the aircraft carrier USS Nimitz and disappeared on Sunday, when he or she was reported missing, possibly having gone overboard.

“The Sailor has been listed as Duty Status Whereabouts Unknown on board aircraft carrier USS Nimitz,” it added. Navy personnel have been combing through the super carrier as the mystery deepens.

As of Monday the unnamed sailor’s status is still unknown as rescue and recovery efforts continue.

Status Update: “The search & rescue efforts for the missing USS Nimitz Sailor are ongoing in the North Arabian Sea.

USS Nimitz called man overboard @ 6:47pm local time on Sept 6 after personnel aboard the ship were unable to locate the Sailor following a shipwide search.”

A subsequent follow-up indicated there was a “man overboard” alert on Sunday evening, but appears this report was issued as a result of the sailor not be found, rather than personnel actually witnessing or confirming this to be the case:

“USS Nimitz called man overboard @ 6:47pm local time on Sept 6 after personnel aboard the ship were unable to locate the Sailor following a shipwide search.”

At the moment the sailor’s name is being withhold in accord with Navy policy.