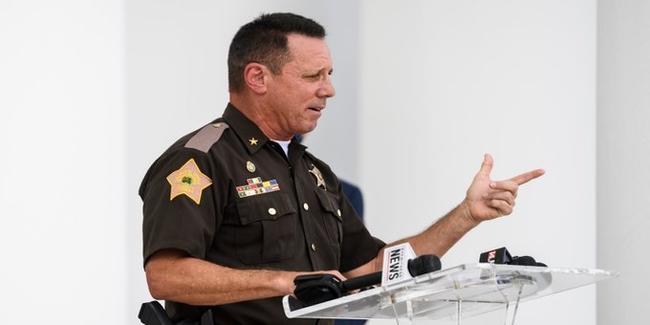 
Vanderburgh County Sheriff Dave Wedding made a surprise announcement late last week – abandoning the Democratic party after months of anti-police protests and civil unrest, and switching his party affiliation to Republican, according to 14 News.

Wedding made the announcement Thursday outside White Stallion Energy in Evansville, where Mayor Lloyd Winnecke and Lt. Governor Suzanne Crouch were in attendance.

Sheriff Wedding says the switch is to make a statement against what is going on nationally with civil unrest and negative attitudes towards law enforcement. He admitted that this will likely ruffle some feathers, but believes his track record in working with both Democrat and Republican leaders in the county will allow him to maintain those relationships despite the switch.

After the announcement, Wedding told us he feels the Democratic Party has lost its way. –14 News

“The Democrats represented hard-working individuals,” said Wedding. “People who were just working class America and they believed in values, family and that you’ve got to work to achieve. I think we’ve lost that in the Democratic Party. I was one of the people who had nothing growing up and I’ve worked to achieve. I’m proud of where I was and where I am today.”

“Watching the daily burning of American flags, failing to be able to use the word God in any sentence at most Democrat-led functions, denouncing law enforcement as if we’re the evil people. I am very proud of my profession in law enforcement and when people attack us, it’s pretty insulting.”

While we are disappointed with Dave Wedding’s decision to leave the Democratic party, we are more disappointed with the reasoning he provided the community for his choice. We are aware that there are many conversations regarding police reform on a national level. However, Sheriff Wedding knows that the Democratic majorities on the County Commissioners and City Council have been strongly and consistently supportive of local law enforcement. In contrast, he has always pointed out the Republican controlled Vanderburgh County Council and Indiana State Legislature were responsible for the creation of budgetary restraints that made his job more difficult. His move to the Republican party after benefiting from years of Democratic support make his political opportunism all the more distasteful. Nevertheless, we as a Party look forward to building on last year’s success and welcoming a new wave of fresh leadership this fall, and re-electing proven leadership including County Councilman Mike Goebel, State Representative Ryan Hatfield, County Coroner Steve Lockyear and County Commissioner Ben Shoulders; among many others.

Two Democrat Sheriffs in Indiana joined the Republican Party! Proud to welcome Sheriff Dave Wedding of Vanderburgh Co. and Sheriff Tom Latham of Posey Co. to the GOP! Under President @realdonaldtrump we stand for Law & Order and we Back the Blue! https://t.co/7JQNfnAGwl