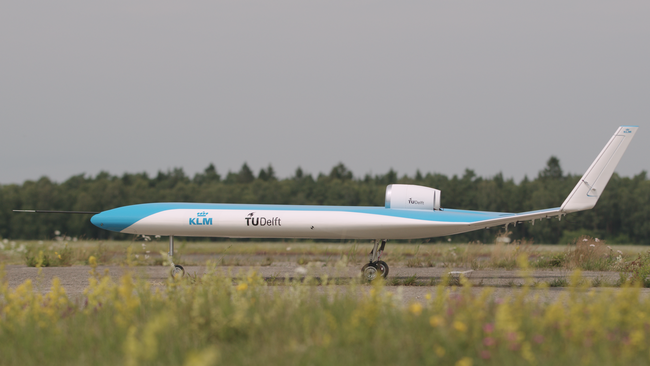 
A team of European researchers and engineers conducted a “successful” maiden flight of a scaled model of a futuristic aircraft design called the “Flying-V.”

Project leader Dr. Roelof Vos and his team from Delft University of Technology in the Netherlands, also known as TU Delft, recently tested a 22.5 kg and 3-meter scale model of the plane at an airbase in Germany. They worked with Airbus to test takeoffs, flight maneuvers, and landings.

“One of our worries was that the aircraft might have some difficulty lifting-off, since previous calculations had shown that ‘rotation’ could be an issue. The team optimized the scaled flight model to prevent the issue but the proof of the pudding is in the eating. You need to fly to know for sure,” Vos said in a statement published on TU Delft’s website.

Here’s the scaled flight model of the Flying-V.

The statement said the Flying-V is a highly energy-efficient long-distance commercial airliner that could save airlines up to 20% in fuel costs versus the traditional Airbus A350-900. The team received funding from Dutch national carrier KLM Royal Dutch Airlines in 2019.

“In recent years, KLM has developed as a pioneer in sustainability within the airline industry,” Pieter Elbers, CEO and president of KLM, said in a statement in June 2019. “We are proud of our progressive cooperative relationship with TU Delft, which ties in well with KLM’s strategy and serves as an important milestone for us on the road to scaling-up sustainable aviation.”

Vos and his team have years of work ahead before a 1:1 scale of the aircraft takes flight. The next step for the team is to process the data collected during the flight to tweak aircraft design. More tests are expected in the future.

While there was no mention on poential airspeeds, we have noted there’s been a big push to revive supersonic commercial flight by the end of the decade (see: here & here).

Could the Flying-V be the future design of commercial airlines by 2030?