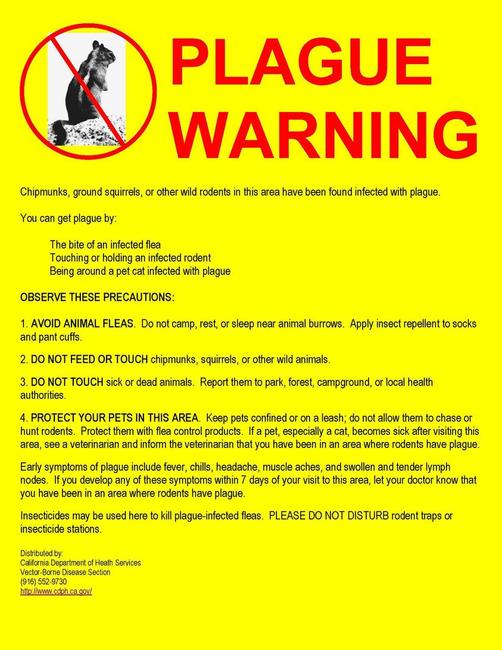 
After new cases of the bubonic plague were found in Los Angeles, Colorado, and in Mongolia near the Russian border this summer, it appears the infamous plague strain responsible for killing tens of millions of Europeans during the 14th Century continues to surface, this time, in South Lake Tahoe, California.

The US Forest Service, Lake Tahoe Basin Management Unit, issued a “plague warning” on Thur. (Sept. 3) ahead of Labor Day weekend, informing the public that fleas in the area tested positive for the bubonic plague.

“Visitors should take the following precautions when visiting areas where active Bubonic Plague has been found. Remember to stay on trails, and if you must bring your pet, keep them on a short leash and do not let them investigate rodent burrows,” the Forest Service wrote in a recent Facebook post.

The post continued, “Bubonic Plague is naturally occurring in many parts of California, including the Sierra Nevada, and can be transmitted through bites from infected fleas.”

Forest Service’s Lisa Herron told CBS13 Sacramento that people throughout the Lake Tahoe “should be on the lookout for unusual things like a rodent acting unusual, or a rodent that is dead with no visual signs of trauma.”

The California Department of Health confirmed to CBS13 that fleas tested positive for the plague in the resort area of the Sierra Nevada mountains, more specifically, around the Tallac Historic Area and the Taylor Creek Visitor Center.

To mitigate the spread, the area has been treated for “active plague,” the California Department of Health told ABC7 News.

Fears of the plague have shown up in US internet search results, hitting record highs this summer.

A handful of cases of the plague have surfaced this year as the coronavirus pandemic continues to rage across the world.