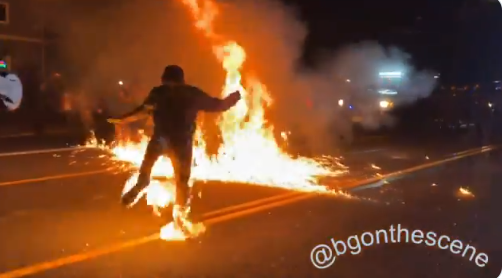 
A Portland protester rioter caught fire after running through a molotov cocktail thrown by a comrade Saturday night, during the city’s 100th straight of protests.

The man attempted to douse the flames as one onlooker shouted “stop, drop and roll!“

Portland police worked with state troopers to force the crowd to disperse, thwarting their attempts to march to the nearby East Precinct, where dozens of police officers were waiting for them, according to Oregon Live.

Dozens of officers arrived to block the crowd’s path on Stark Street. Around 9:20 p.m., some people in the crowd threw at least three Molotov cocktail-like devices toward the police line. Another person lit a firework. One of the devices appeared to wound the foot of a bystander.

The series of explosions prompted police to immediately declare the gathering a riot and order people to leave. Police forced the crowd east and, within minutes, released tear gas onto the crowd. –Oregon Live

Fire bombs were thrown at officers, injuring at least one community member. Police are trying to restore peace and order for the safety of this neighborhood. https://t.co/V3UOCR6Bc4

Extremely heavy smoke in SE Portland tonight as #antifa riot using Molotov cocktails. One person was already set on fire. BLM-antifa are celebrating more than 100 days of violence in the city. #PortlandRiots pic.twitter.com/hqA5lF9gao

Earliest I’ve ever seen it declared a riot. Teargas and fireworks already in full force, and this was just shortly after 9 pm in Portland #PortlandRiots #Portland pic.twitter.com/1CzI5mrorj

Police eventually rushed in and took down several protesters.