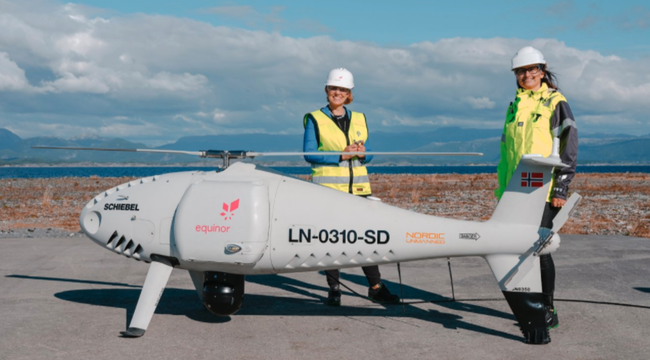 
A helicopter drone flew a 3D-printed part to an offshore gas platform in the Troll gas field off the west coast of Norway. The operation was the world’s first logistics operation using a drone to an offshore installation, read a press release from oil and gas company Equinor.

“Development is rapid, and we see the huge potential within drone technology that could transform the way we operate, both under and above the sea surface. Equinor aims to lead the way in utilizing new technology on the Norwegian continental shelf,” said Equinor’s executive vice president for Development and Production Arne Sigve.

“Drones could reinforce safety, boost production efficiency and contribute to lower CO2 emissions from Norwegian oil and gas. Drones will also play a role as we shape new energy solutions on the Norwegian shelf,” Nylund continued.

The helicopter drone traveled about 50 miles to the platform in the Troll field, at an altitude of 5,000 feet. The delivery of a 3D printer part was the first of its kind, where a freight operation was conducted with a helio-drone.

The operator of the Schiebel Camcopter S-100 was the Sandnes-based company Nordic Unmanned. Equinor worked with the drone operator and with the Civil Aviation Authority, Avinor Air Navigation Services, and the Norwegian Communications Authority to conduct the trial flight.

“Over the longer term, we expect to see the new infrastructure for logistics and support operations, which can reinforce what we already have within vessels and helicopters,” said Alena Korbova Pedersen, who leads supply chain development for Equinor.

“If we are to develop the logistics solutions of the future on the Norwegian shelf, where drones could play an important role, we must cooperate across all of the industry’s players; operating companies, suppliers, the authorities, and the trade union and safety interests,” Pedersen continued.

Over the long-term, the adoption of drones for logistical flight missions will cut down operation costs for all sorts of companies, not just oil and gas ones. The caveat to this is the decline in pilot demand for helicopters, though a boom for drone pilots (read: “Airline Pilots Learn To Fly Drones Amid Mass Carrier Layoffs”).