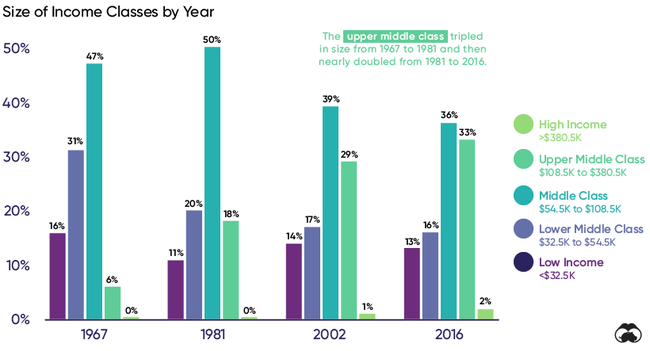 
For decades, a majority of Americans have been able to climb the economic ladder by earning higher incomes than their parents. These improving conditions are known as upward mobility, and form an important part of the American Dream.

However, as Visual Capitalist’s Marcu Lu explains below, each consecutive generation is finding it harder to make this ascent. In this graphic, we illustrate the decline in upward mobility over five decades using data from Opportunity Insights.

This graphic plots the probability that a 30-year-old American has to outearn their parents (vertical axis) depending on their parent’s income percentile (horizontal axis). The 1st percentile represents America’s lowest earners, while the 99th percentile the richest.

The key takeaway, though, is that the starting point of this downward trend has shifted to the left. In other words, fewer people in the lower- and middle-classes are climbing the economic ladder.

Declines can be seen across the board, but those growing up in the middle-class (50th percentile) have taken the largest hit. Within this bracket, individuals born in 1980 have only a 45% chance of outearning their parents at age 30, compared to 93% for those born in 1940.

However, this may not be as bad as it sounds. While the prices of some goods and services have risen over time, others have actually become more affordable. Since January 1998, for example, the prices of electronic goods such as TVs and cellphones have actually decreased. In this way, individuals today are more prosperous than previous generations.

This benefit is likely outweighed by relative increases in other services, though. Whereas inflation since January 1998 totaled 58.8%, the costs of health and education services increased by more than 160% over the same time frame.

While wages have been stagnant as a whole, it doesn’t paint the full picture. Another factor to consider is America’s changing income distribution.

Is It All Bad News?

Americans are less likely to earn more than their parents, but this doesn’t mean that upward mobility has completely disappeared—it’s just becoming less accessible. Below, we illustrate the changes in size for different income classes from 1967 to 2016.

The data suggests that some middle class Americans are still managing to pull themselves up into the next income bracket—it’s just not an effect that was as broad-based as it’s been in the past.

Does The American Dream Still Exist?

The American Dream is the belief that upward mobility is attainable for everyone through their own actions. This implies that growth will be continuous and widespread, two factors that have seemingly deteriorated in recent decades.

Researchers believe there are numerous complex reasons behind America’s stagnating wages. A decline in union membership, for example, could be eroding employees’ collective bargaining power. Other factors such as technological change may also apply downwards pressure on the wages of less educated workers.