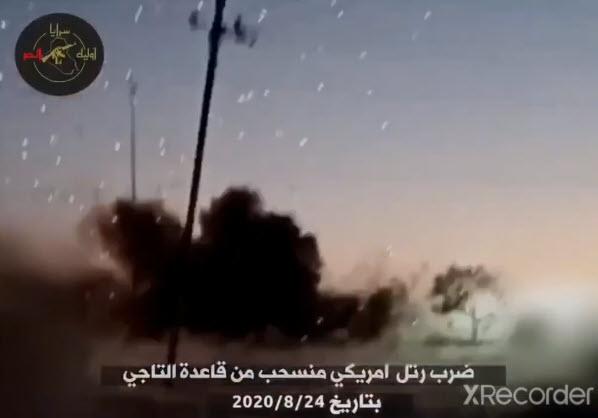 On September 3, an explosion of an improvised explosive device (IED) targeted a convoy with equipment of the US-led coalition in the southern Iraqi province of Dhi Qar.

Iraqi troops that were escorting the convoy suffered no casualties. According to local sources, no significant damage was caused to the equipment. Following the incident, security forces detained 2 suspects near the explosion site. The investigation is ongoing.

However, it is no secret that the attack was likely conducted by one of multiple pro-Iranian Shiite groups that surfaced in the country following the assassination of Iranian General Qassem Soleimani and several prominent Iraqi commanders by a US strike in Baghdad in January.

Earlier, the Guardians of Blood (also known as Islamic Resistance in Iraq) released a video showing an IED attack on another convoy with US equipment. The attack took place near Camp Taji, north of Baghdad on August 23. During the last few months, such attacks became a regular occurrence across Iraq.

Pro-Iranian forces not only created a wide network of active cells that carry out these operations, but also successfully track movements of US forces and their equipment. According to local sources, a large number of Iraqi security personnel involved in the guarding of US forces and facilities in fact support the Iranian-backed campaign against the United States as well as the public demand of the full US troop withdrawal from Iraq.

Despite loud statements and the handing over of several US bases to the Iraqi military, Washington is not reducing its military presence in the country. Rather it’s regrouping its forces and strengthening the security of the remaining facilities. Tensions are on the rise not only in Iraq.

On September 3, Israel’s ImageSat International released satellite images showcasing the impact of the recent Israeli strikes on Iranian-linked targets near the Syrian capital of Damascus, and in the province of Homs. The report claimed that the strike on the Damascus International Airport destroyed a headquarters and a warehouse used by Iranian forces. The same area was the target of an Israeli attack in February. The strike on the T4 airport in Homs damaged the main runway and an apron. As a result, the air base was temporary placed out of service.

A few days earlier, the Israeli Defense Forces claimed that they had hit approximately 100 Hamas targets in the Gaza Strip in August. This supposedly included 35 hits on Hamas weapons manufacturing sites, along with 30 underground sites, 20 observation posts and 10 sites linked to the group’s aerial capabilities such as drones. According to the Israeli side, these strikes were a response to rocket and other attacks from the Gaza Strip. Palestinian groups claim that they just retaliate to permanent pressure and acts of aggression from the Israeli side.

Taking into account the war in Yemen, a large part of the Middle East has been turned into a battleground of the conflict between the Israeli-US bloc and the Iranian-led Axis of Resistance.