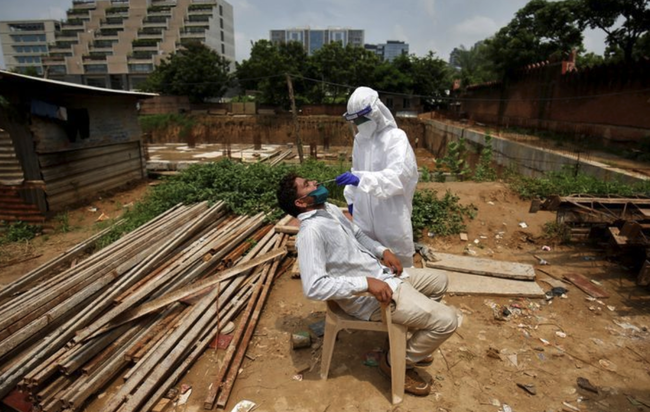 US coronavirus numbers continued to slow this week, even as rising numbers in Iowa, North Dakota, South Dakota and Alabama stoked concerns that the US pandemic is merely migrating once again. But as we head into the long holiday weekend in North America, the biggest story internationally is India, which is on the cusp of surpassing Brazil as the world’s largest outbreak.

Government officials in New Delhi have been pushing a mass testing drive to try and eradicate the virus from the hardest-hit areas, which include the densely populated slums of Delhi and Mumbai.

Once again, India reported 80k+ new infections in 24 hours on Friday, with 83,341 coronavirus infection, to be exact. The latest numbers put India’s total at 3.94 million, health ministry data showed on Friday, putting it within striking distance of 4 million, and surpassing Brazil, whose outbreak has finally begun to slow.

Asia’s worst-hit country is now just around 60,000 cases behind Brazil, which has around 4 million confirmed cases. The US, the worst-affected country, has more than 6 million cases.

India has recorded the largest daily tally in the world for the past month, as PM Narendra Modi continues to push ahead with reopening his economy after an economically devastating lockdown.

GDP data reported earlier this week revealed that India’s economy took a beating during the quarter ended in June, as the strict lockdown forced the people inside, and away from commerce.

While cases have soared, deaths in India from COVID-19 have remained relatively low, a sign of the aggressiveness of the government’s testing campaign. The ministry said on Friday that 1,096 people died from COVID-19 in the last 24 hours, taking India’s death toll to 68,472.

Former Italian PM Silvio Berlusconi has been admitted to a hospital in Milan after testing positive for COVID-19 earlier this week. The 83-year-old, who still leads the Forza Italia party, had been isolating at his home near Milan. A spokesman insisted his hospitalization was “a precautionary measure.”

As an outbreak in central Europe continues to smolder, Hungary reported a daily record of 459 coronavirus infections Friday, with new cases mostly affecting young people. Active cases climbed to 2,817, while the number of deaths rose by one to 621.

In South Korea, authorities are extending a set of strict social distancing measures in the Seoul area by a week to Sept. 13, Health Minister Park Neung-hoo said. The country will also extend nationwide level 2 social distancing steps by two weeks, and delay the start of in-person education until Sept. 20, vs Sept. 11.

Earlier Friday, Prime Minister Chung Sye-kyun warned that rushing to ditch the precautions could open the door to another flareup.