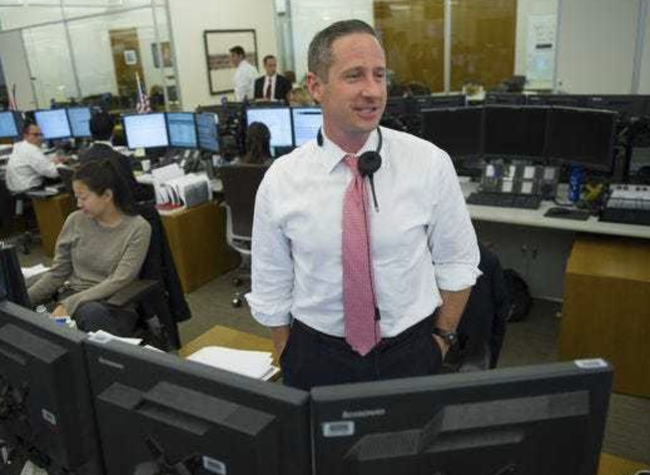 
After being forced to close his fund, Marble Ridge Capital, after a Jeffries trader and former Navy SEAL reported his dubious conduct to Jeffries General Counsel, who informed the authorities, prompting the trader to record some seriously incriminating and embarrassing phone calls, It looks like Daniel Kamensky is finally in custody.

Prosecutors in New York announced Thursday afternoon that Kamensky had been arrested and charged with securities fraud, obstruction of justice and extortion for allegedly trying to rig a bidding process involving bankrupt Neiman Marcus as Marble Ridge bid to supply the floundering retailer with a high interest loan.

The news was expected. Just last week, in a Houston courtroom, lawyers for Neiman Marcus pressed a judge to order Marble Ridge to pay out more than $50 million into an escrow account so that Neiman could collect the money promised from the firm before Marble Ridge dissolves.

More than a week ago, we reported the salacious story of Kamensky’s downfall.  Joe Femenia, the head of distressed-debt trading at Jefferies Financial Group, is the man who, per court filings, taped conversations that brought down Kamensky and his hedge fund down. The proverbial crap hit the fan after Kamensky urged Femenia to not submit a bid for part of the bankrupt retailer, nicknamed “Needless Markups”.

Legal filings show Kamensky telling Femenia to “Stand DOWN”. Probably not a bright thing to say to a Navy SEAL…

When Kamensky realized that he had made a “grave mistake”, and tried to fix things, he only made things worse for himself.

By the time Kamensky urged Femenia, on a second phone call, to “treat the conversation off the books” and to “change his recollection” of how their first call went, Fermenia was recording.

In one, Kamensky pleaded: “[I]f you’re going to continue to tell them what you just told me, I’m going to jail, OK? Because they’re going to say that I abused my position as a fiduciary, which I probably did, right? Maybe I should go to jail. But I’m asking you not to put me in jail.”

That’s not a great look.

The charges were brought by Audrey Strauss, the acting head of the Southern District of New York.

Audrey Strauss, the Acting United States Attorney for the Southern District of New York, and William F. Sweeney Jr., the Assistant Director-in-Charge of the New York Field Office of the Federal Bureau of Investigation (“FBI”), announced today that DANIEL KAMENSKY, the founder and manager of New York-based hedge fund Marble Ridge Capital (“Marble Ridge”), was charged in a Complaint in Manhattan federal court with securities fraud, wire fraud, extortion, and obstruction of justice.  KAMENSKY’s alleged criminal acts occurred  in connection with his scheme to pressure a rival bidder to abandon its higher bid for assets in connection with Neiman Marcus’s bankruptcy proceedings so that Marble Ridge could obtain those assets for a lower price.  KAMENSKY then attempted to persuade the rival bidder to cover up the scheme.  KAMENSKY was arrested today and is expected to be presented before Magistrate Judge James L. Cott this afternoon.

Acting Manhattan U.S. Attorney Audrey Strauss said:  “As alleged, Daniel Kamensky disregarded his fiduciary responsibility to unsecured creditors of Neiman Marcus – and broke the law – when he attempted to coerce a competitor to withdraw a higher bid for assets of the bankruptcy estate.  As further alleged, acknowledging the illegality of his actions, Kamensky then attempted to obstruct an investigation by trying to persuade the competitor to change his account of the coercion, telling the competitor that otherwise ‘this is going to the U.S. Attorney’s Office.’  As today’s charges show, Kamensky was right about that.”

FBI Assistant Director-in-Charge William F. Sweeney said:  “As alleged, Kamensky intentionally violated his fiduciary duty as a member of the Official Committee of Unsecured Creditors in the Neiman Marcus bankruptcy by preventing the sale of securities to an investment bank so he could acquire the same securities at a significantly lower price for his own fund.  In a conversation with an employee of the investment bank, Kamensky went as far as to say, ‘Maybe I should go to jail.’  Today, we’ve removed the ‘maybe,’ and forced him to answer for his conduct.”

As alleged in the Complaint unsealed today in Manhattan federal court:[1] DANIEL KAMENSKY was the principal of Marble Ridge, a hedge fund with assets under management of more than $1 billion that invested in securities in distressed situations, including bankruptcies.  Prior to opening Marble Ridge, KAMENSKY worked for many years as a bankruptcy attorney at a well-known international law firm, and as a distressed debt investor at prominent financial institutions.
The Neiman Marcus Bankruptcy.

Neiman Marcus, an American chain of luxury department stores with stores located across the United States, filed for Chapter 11 bankruptcy protection in the United States Bankruptcy Court for the Southern District of Texas (the “Bankruptcy Court”) in May 2020.  At the outset of the bankruptcy, Marble Ridge, through KAMENSKY, applied to be on the Official Committee of Unsecured Creditors (the “Committee”) and was thereafter appointed to be a member of the Committee.  As a member of the Committee, KAMENSKY had a fiduciary duty to represent the interests of all unsecured creditors as a group.

Advisers to the Committee informed counsel for Marble Ridge of their call with the Employees, and after speaking with KAMENSKY, counsel for Marble Ridge falsely informed the advisers that KAMENSKY had not asked the Employees not to bid, but instead had told them to place a bid only if they were serious.  Later that evening, KAMENSKY contacted IB Employee-1 and attempted to influence what IB Employee-1 would tell others, including the Committee and law enforcement, about KAMENSKY’s attempt to block the Investment Bank’s bid for the MYT Securities.  KAMENSKY said at the outset of the call, in substance, “this conversation never happened.”  During the call, KAMENSKY asked IB Employee-1 to falsely say that IB Employee-1 had been mistaken and that KAMENSKY had actually suggested that the Investment Bank bid only if it were serious, and made comments including the following:  “Do you understand…I can go to jail?”  “I pray you tell them that it was a huge misunderstanding, okay, and I’m going to invite you to bid and be part of the process.”  “But I’m telling you…this is going to the U.S. Attorney’s Office.  This is going to go to the court.”  “[I]f you’re going to continue to tell them what you just told me, I’m going to jail, okay? Because they’re going to say that I abused my position as a fiduciary, which I probably did, right? Maybe I should go to jail. But I’m asking you not to put me in jail.”

During a subsequent interview with the Office of the United States Trustee, which was conducted under oath and in the presence of counsel, KAMENSKY stated that his calls to IB Employee-1 were a “terrible mistake” and “profound errors in lapses of judgment.”
After this series of events, Marble Ridge resigned from the Committee and has advised its investors that it intended to begin winding down operations and returning investor capital.

This case is being handled by the Office’s Securities and Commodities Fraud Task Force.  Assistant U.S. Attorneys Richard Cooper and Daniel Tracer are in charge of the prosecution.

The allegations contained in the Complaint are merely accusations, and the defendant is presumed innocent unless and until proven guilty.