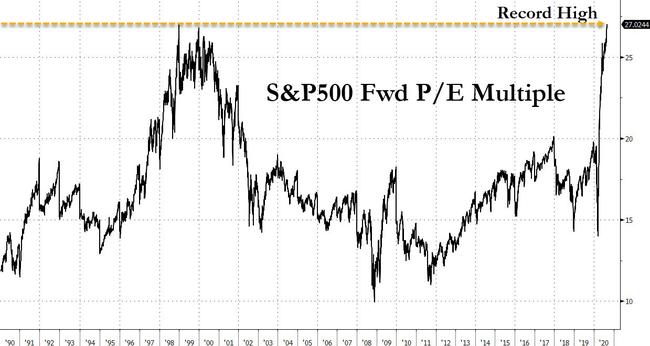 
It’s official: a few weeks after the S&P hit an all time high price erasing all the losses from the covid crisis which just so happened was the best thing to ever happen to large corporations and the ultra wealthy, moments ago the S&P500’s forward P/E multiple also hit an all time high, surpassing the dot com peak of 27x, printing at 27.02x last.

So with the S&P now trading at an all time absolute price and a record high forward P/E multiple, it also means that the S&P500 is now the most disconnected – to the upside – from both the median and average Wall Street target on record, which are 3,200 and 3,198, respectively.

And the cherry on top: with the S&P at 3,550 currently, it is above all but two of the sellside strategist forecasts tracked by Bloomberg, which would be Cantor Fitzgerald, and Goldman, which hiked its price target from 3,000 to 3,600 two weeks ago (the S&P is even above the perpetually cheerful permabull Tom Lee’s target of 3,525).

This means that either the S&P will reverse and soon, or we will see a cascade of price target revisions higher – similar to what we have observed with both AAPL and TSLA amid a panicked scramble to upgrade the runaway stocks – into the last quarter as one after another analyst scramble to not end up being the most wrong on where the S&P closes the year, in the process pushing the market ever higher.

Finally, for those asking if the S&P could hit not 4,000 but 5,000 the answer is yes, and we explained yesterday just how this could happen.

How the S&P gets to 5000:
1) every company announces a 5:1 stock split
2) 4 weeks later every company launches an At The Money sale of common stock to Robinhooders
3) the newly raised cash is used to buyback stock
4) repeat steps 1-3 as many times as necessary