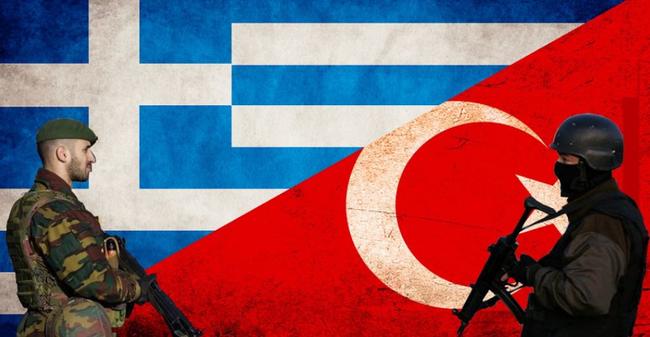 
Authored by Michael Leigh via Bruegel.org,

If the European Union can mediate effectively to resolve current Greek-Turkish tensions over energy in the Eastern Mediterranean, it could also provide an opportunity to tackle more deep-rooted problems.

The European Union is seeking to mediate in a naval confrontation on its doorstep, in the Eastern Mediterranean, which involves NATO partners Greece and Turkey, as well as EU member Cyprus.

EU foreign ministers are discussing the issue and, without de-escalation, sanctions against Turkey could be implemented.

But so far, the two most powerful EU nations have adopted a ‘good cop, bad cop’ approach that conveys different and confusing messages – and has not prevented escalation. Chancellor Angela Merkel, with the added authority of holding the EU’s six-month revolving presidency, has launched a German initiative to prevent escalation, reduce tensions and overcome longstanding conflicts. But French President Emmanuel Macron, while not eschewing mediation, has opted for a show of force, sending French naval vessels into disputed waters to counter the presence of Turkish warships.

The dispute is ostensibly over ownership of offshore gas deposits and the delimitation of 200-mile exclusive economic zones (EEZs).

Turkey has sent exploration vessels and warships into waters claimed by Greece and Cyprus and begun drilling for gas. Despite its 1,600 kilometre Mediterranean coastline, Turkey is the only Eastern Mediterranean state without internationally recognised rights to offshore resources in the area because nearby Greek islands and Cyprus have secured the right to generate EEZs under the United Nations Convention on the Law of the Sea (UNCLOS). Turkey is one of fifteen UN members that is not a party to UNCLOS, and Ankara insists that Turkey’s continental shelf gives it ownership rights that take priority over the UNCLOS-backed claims of Cyprus and Greece.

But the dispute also reflects deep-rooted rivalries. Greece and Turkey are at loggerheads over the division of Cyprus and rival maritime claims in the Aegean. Ankara asserts the right of ‘the Turkish Republic of North Cyprus’, recognized only by Turkey, to a share of offshore gas resources. The government of the Republic of Cyprus accepts in principle the rights of Turkish Cypriots to a stake in the country’s energy resources, but this commitment has yet to be tested as Cyprus is still seeking investors to fund the infrastructure to bring deep-water Cypriot gas to market.

Differences over offshore gas have also been exacerbated by the Libya conflict, with Greece and Turkey supporting opposing sides. Turkey concluded a delimitation agreement with Libya in 2019, which sweeps aside Cypriot and Greek claims. Greece responded in August by inking a partial maritime delimitation agreement with Egypt which is incompatible with Turkish claims. Greek and Turkish vessels collided at sea in mid-August and there is a risk of further clashes. In January, Cyprus, Egypt, Greece, Israel, Italy, Jordan, and the Palestinian Authority set up the Eastern Mediterranean Energy Forum, which Ankara views as threatening Turkish interests.

The EU has called for the sovereign rights of its members Cyprus and Greece to be respected. But the different approaches taken by France and Germany could undermine the EU’s mediation effort. Ms Merkel wants the union to act with its trademark soft power to reduce tensions. She also wishes to preserve cooperation with Turkey on migration and is sensitive to feelings among the population of Turkish origin in Germany.

Mr Macron considers that a display of ‘hard power’ will deter Mr Erdogan from military threats. His accusation that President Erdogan is pursuing an “expansionist policy, mixing nationalism and Islamism, which is incompatible with European interests and is a factor for destabilisation” was not calculated to draw Turkey’s president into talks. In addition, France, Greece, Cyprus and Italy have launched a joint aeronautical exercise south of Cyprus, while Greece has undertaken air force exercises with the United Arab Emirates in Crete.

Greek government sources, meanwhile, have questioned whether Turkey is a fitting negotiating partner. Greek Prime Minister Kyriakos Mitsotakis said in late August that Greece would extend its territorial waters from six to twelve miles in the Ionian Sea, bordering Albania and Italy, and that, in future, a similar step could be taken in other areas. Turkish leaders have reminded Greece that in 1995 the Turkish Grand National Assembly declared that if Greece unilaterally extended its territorial waters it would be a casus belli for Ankara.

The EU’s main interest in the Eastern Mediterranean is conflict prevention rather than energy security. While the dispatch of French naval vessels to the eastern Mediterranean, joint air force exercises and the implicit threat of sanctions may concentrate minds in Ankara, they are more likely to play into Mr. Erdogan’s anti-EU narrative. In any event, Mr Erdogan knows there is unlikely to be a consensus in the EU for economically significant sanctions. A tough line on Turkey’s maritime rights, dubbed its ‘Blue Homeland’, is widely shared by political parties in Turkey.

Turkey is also an important partner for the EU on trade, counter-terrorism and migration. The 2016 joint initiative to stem illegal migration through Turkey to the EU is the most palpable example of such cooperation. The EU is vocal in calling for the respect of the rule-of-law in Turkey but, at the same time, needs to engage with Ankara in areas of mutual interest.

The gas discovered so far off Cyprus and Israel is of considerable value to the countries themselves, but insignificant in terms of international energy markets. The attractive notion of a pipeline from the region to Europe, agreed in principle by the governments of Cyprus, Greece and Israel, faces technical and financial obstacles and will not be happen unless considerable additional quantities are discovered. Meanwhile, Cyprus has ordered a floating regasification and storage plant to enable it to import liquified natural gas, while its own gas remains stranded because of lacking infrastructure. Greece has made no commercially significant offshore gas discoveries to date.

Turkey’s recent discovery of large gas deposits in the Black Sea may be a game changer. The Black Sea discoveries, of still undetermined extent, could curb Turkey’s eagerness to gain access to Eastern Mediterranean gas and give it a stake in regional energy markets as a supplier. This could open a window for negotiations with Greece, by shifting attention in Ankara to more promising energy prospects for Turkey. But mediation will only stand a chance if there are convincing incentives for both parties. For example, the EU could double down on its rejection of any resort to force by Turkey and, at the same time, press for Turkish participation in the Eastern Mediterranean Energy Forum. Chancellor Merkel’s preference for mediation, in liaison with the High Representative, could lead ultimately to bilateral negotiations between Turkey and Greece and compromises on their conflicting claims.

The EU has economic as well as geopolitical interests at stake in relation to energy exploration and production in the Black Sea and Eastern Mediterranean. Mr. Erdogan expects that gas from the Black Sea could come on stream by 2023, though 2025 seems more realistic. Black Sea gas from Turkey could be exported to Europe, through the Southern Gas Corridor, especially to Balkan countries, which currently depend on Russian gas. Italy, too, could receive gas from the Black Sea, as the Trans Adriatic Pipeline (TAP), the last link in the southern corridor, is due to become operational by the end of the year.

Major energy companies, including Italy’s ENI and its French partner TOTAL, have been prevented from exploring for gas in disputed areas by the presence of naval vessels. De-escalation and negotiations would enable them to resume exploration. New discoveries would help Cyprus attract investors to build the pipelines required to bring its gas to market.

A revival of tourism, if the Eastern Mediterranean is no longer perceived as a conflict zone, would contribute to the recoveries of Cyprus, Greece and Turkey from the coronavirus-induced downturn. Conflict-resolution would bring reputational gains to Turkey, where the business climate suffers from weaknesses in the rule of law. This would raise the country’s ratings and improve conditions for European investment and banking in Turkey.

Greece and Turkey both profess a willingness to engage in negotiations, albeit on different terms. If Chancellor Merkel and High Representative Borrell succeed in bringing this about though mediation, there will be gains for all concerned.