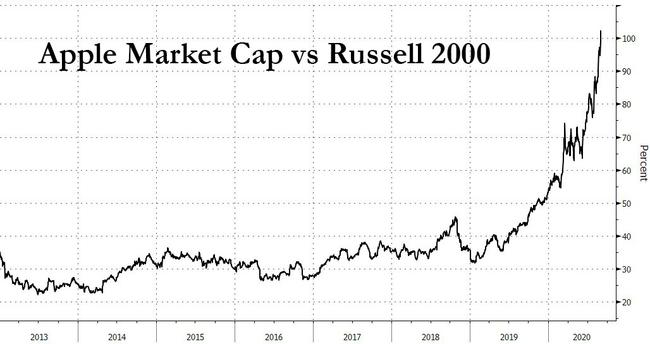 
On Monday, in a tweet that went viral, we showed that the market cap of Apple was on the verge of overtaking the entire Russell 2000 index of small-cap companies.

AAPL just 2% away from surpassing the entire Russell 2000. This is absolute insanity pic.twitter.com/mblZO5TAZv

Well it’s now official, and as of Tuesday’s 4.3% jump in AAPL stock price largely on the back of the latest upgrade from Bank of America, which raised its price target to $140 post-split citing an even greater multiple expansion as the catalyst (because there is nothing else really)…

The next chart shows the historical transformation of Apple as not only the biggest company in the world, but also the one company which now has the biggest impact on pretty much anything market-related.

We previously discussed the unprecedented negative put-call skew, which we said will keep pushing AAPL even higher due to the layered gamma which is creating an upward feedback loop, and sure enough this is still the case.

… we will give the last word to the Bear-Traps report which describes the “Insanity” in Apple Options:

The convexity skew picture on big-name equities like Apple $AAPL has gone parabolically stupid. Let’s keep this simple and draw a conclusion.

*Both options are $50 out of the money, approx data, BUT it is nearly 3x more expensive to buy upside risk in AAPL equity. What does this mean?

Apple closed near $130, while the cost of speculative upside calls is weighted heavily against the buyer. Someone must have reached out to Buffett today because he can make a fortune in selling $AAPL upside calls. Let us explain.

Highly unusual activity, we have a higher stock price in Apple AAPL with a much higher cost of equity upside. Equity vol usually explodes higher in market crashes, NOT bull markets. As you can see above, in normal Apple equity bull markets – see all of 2019 – AAPL implied vol has been CHEAP!

In our institutional client chat on Bloomberg, a hedge fund put on this trade and we are sharing it with permission.

Apple was worth $1.5T at the end of July and today she stands tall at $2.2T. In order for the client to lose money* at January expiration, the stock has to breach $270 ($129 today), which would put the company’s market capitalization very close to $5T, by January 2021, that is a little over four months away.

*The mark to market in the short run can be extremely painful though – if Apple equity soars another 10-20% (Apple is up 50% since late July), that is indeed the catch. AAPL is trading nearly 65% above its 200-day moving average vs. 42% in February’s great bull run.

There are a handful of quant funds pushing around a few stocks (with high impact on QQQ, NDX, SPY) in the options markets. The dealers are getting very nervous.  Last 15 days – Imaging being a large market maker in Apple and Tesla equity options. You make a market, bid – offer, you get lifted and lifted over and over again by buyers to the point where you have raised the price of calls vs puts to multi-year extremes. How short is the Street gamma? VERY.

When call vs. put skew gets this extreme it can be a solid leading risk indicator.