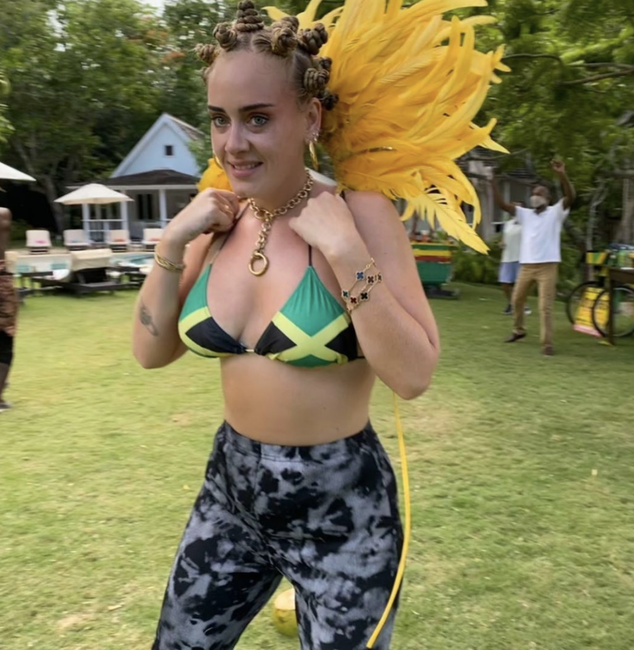 
Pop singer Adele set the Internet on fire late Sunday when she posted a photo of herself following yet another spell of dramatic weight loss, while wearing an outfit that elicited cries of “cultural appropriation” from a legion of social media users.

In a photo purportedly meant to mark Notting Hill Carnival, which was canceled due to the coronavirus pandemic, Adele posted the following photo.

For those who aren’t familiar with Notting Hill, it’s a carnival that celebrates Caribbean and Black culture in the UK.

But apparently, something about Adele’s chosen ensemble of a Jamaican flag bikini top paired with Bantu knots, a traditional African hairstyle worn by black women, struck a chord, and the photo quickly went viral.

In a since deleted tweet, one of Adele’s followers wrote: “Dear white people, please just be yourselves and stop it for good with cultural appropriation. Adele the bantu knots were unnecessary. The Jamaican flag bikini top was unnecessary… Please just stop it.”

Some focused on good-natured jokes.

Hello Pon Di other side I came for chicken and some rice pic.twitter.com/G6O7xzicWM

The jokes really write themselves.

When it came to light that most of the people dragging Adele were American blacks, things got a little complicated, as some tried to parse who actually has a right to criticize which aspects of Adele’s outfit.

I don’t know how African Americans pointing about Adele’s hairstyle turned into an all out dragging fest for them and unnecessary ass insults for them. No they don’t have the right to speak on Carnival because it’s Caribbean, but they can speak on the bantu knots. It’s black.

Contrast all of that with the naively simpleminded message Adele included in her original post: “Happy what would be Notting Hill Carnival my beloved London.”

It’s almost as if foreigners aren’t nearly as sensitive to this ‘cultural appropriation’ nonsense as Americans.