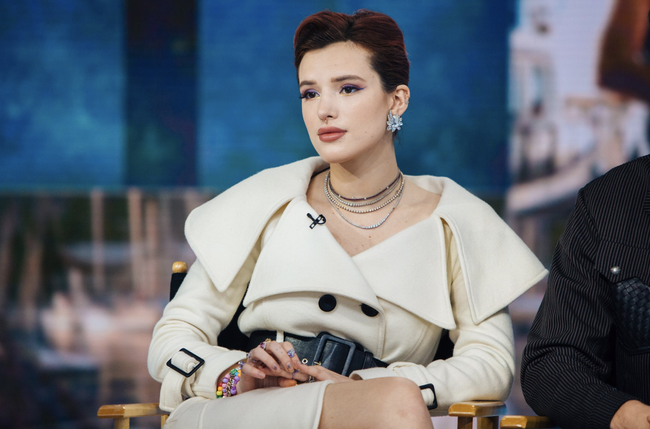 
After breaking the record for most money earned on OnlyFans in a single week, actress Bella Thorne, 22, has been forced by the ‘woke mob’ into apologizing to the ‘sex worker community’ for new restrictions imposed by the app following the former Disney Channel star’s resounding success.

After screengrabs of the scammers’ posts wen viral, OnlyFans decided to set new limits on the prices that creators can charge for pay-per-view content, as well as the amount that users can “tip” creators. Pay per view content can no longer be priced above $50, and tips top out at $100.

Afterwards, the ‘sex workers’ and their ‘woke’ ‘allies’ took to Twitter to hound Thorne and her team into issuing an apology, which she did Saturday afternoon via Twitter.

Who do y’all “celebrities” have to lie so much?? @bellathorne bitch just admit that you fucked up and apologize. Sick of these 30 second excuses y’all come up with 🤦🏾‍♀️ Bella Thorne, who is worth 12 million btw, fucked up a lot of sex workers money and that’s NOT okay. https://t.co/5cOvvEO0Y0

This is how you can tell Bella Thorne is full of 💩. If she was really trying to help sex workers, she would’ve worked WITH them. Instead she used her celebrity status to compete with them, scam their customer base and now wants to “help” and “apologize” after being caught. https://t.co/7UdN2NzmHL

She needs to “apologize” with all the money she is costing sex workers who are losing the ability to pay bills due to Bella Thorne thinking playing on OnlyFans was a cute fun Sunday afternoon 🙄🙄🙄 https://t.co/xThLzRfSla

bella thorne apologize and pay the sex workers that got their bag damaged because of u challenge pic.twitter.com/MvVDX1rwim

Some of these tweets even verge on inciting violence against Thorne.

Bella Thorne fucked up the church’s money and now she wanna apologize.

I feel like all the sex workers should jump her, tbh

To be fair, Thorne’s claim that she joined OF not for the money but as a gesture of support to sex workers in an attempt to remove ‘the stigma’ associated with sex work (an obsession of woke feminist sex workers pushing for decriminalization of prostitution across the US).

PT1 Remove the stigma behind sex, sex work, and the negativity that surrounds the word SEX itself by bringing a mainstream face to it that’s what I was trying to do, to help bring more faces to the site to create more revenue for content creators on the site.

…I am a mainstream face and when you have a voice, a platform, you try to use you in helping others and advocate for something bigger than yourself. Again in this process I hurt you and for that I’m truly sorry.

Thorne also claimed she has a meeting booked with OF to find out more about why the company imposed these new restrictions.

Ps. I’m meeting with only fans about the new restrictions to find out why!!! This is fucked up and I’m sorry comment any ideas or concerns you want brought up to OF!! and send me your links and a pic so I can promote you guys

Unfortunately, the ‘woke mob’ felt her apology was “performative af”.

Bella Thorne should’ve just not bothered to apologize if that’s the only apology she was capable of, it was performative af. If she really cares she’ll donate that 1 mil to sex workers who do this full time, are at the highest risk, & to orgs who work to protect/uplift SWers

To be fair, even if Thorne does experience some career blow back, at least she has her OF income to carry her through.