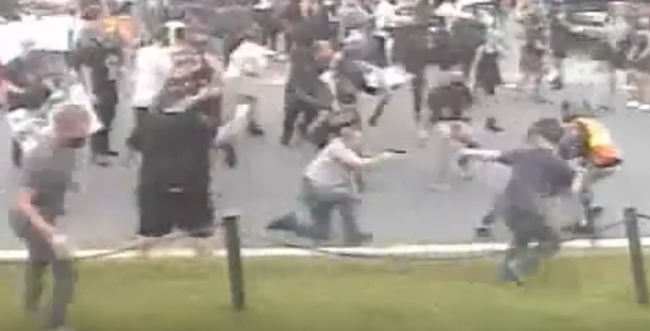 
No charges have been filed against a Florida man who was pictured in a viral protest video whipping out a gun before being immediately swarmed by police and taken into custody.

In the video, a gang of “peaceful” protesters could be seen pursuing and attacking the man, who was found to be carrying a legal concealed carry permit.

But after reviewing several videos of the incident, investigators with the Tallahasse Police Department ruled that the suspect was carrying a concealed carry permit and that brandishing the weapon was justified given the fact that he was being “attacked”.

The suspect appeared at the Tallahassee protest over the weekend carrying a sign during a demonstration at the state capital. The man soon attracted a crowd who surrounded him and pelted him with curses, until members of the crowd physically lashed out at him.

While several of the protesters told local media that the suspect threw the first punch, the video tells a different story. And police investigating the incident ruled with that.

The Tallahassee PD released a statement relaying the facts of the incident. Police said a white man began “documenting the protest” and then was pushed from behind. A fight ensued, police said, and the man was knocked to the ground.

“He got back to his feet and brandished a gun,” but “officers quickly engaged, took the individual into custody and peacefully dispersed the crowd.”

No charges were filed, and no injuries were reported as the suspect “was lawfully carrying a concealed weapon as a license holder.”

Tallahassee PD’s statement ended with a warning, and a plea, calling for people to remain peaceful.

“Tensions are very high, and TPD is calling for protests and actions to remain peaceful. Verbal and physical altercations can quickly escalate into tragedy. Everyone must work together to de-escalate conflict,” the statement said.

Police also released a couple of videos so citizens could judge for themselves. The videos clearly show that the gun owner was “knocked to the ground and under attack before lawfully defending himself.”

Watch the videos below: