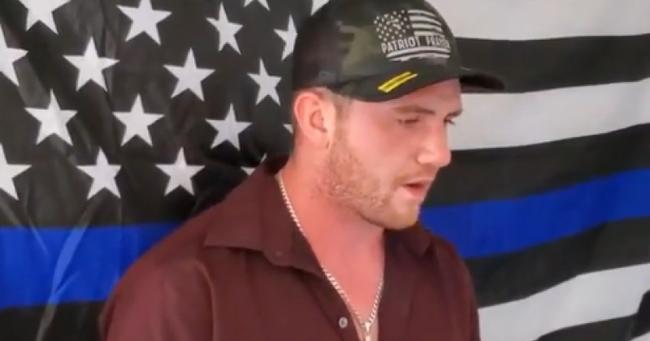 A friend of Jay Bishop who was stood next to Bishop when he was executed in cold blood has spoken out, saying the pair were deliberately “hunted down” by leftists.

Bishop was shot dead on Saturday night in Portland. Video footage of the incident shows someone shouting “We’ve got a Trumper right here,” before another person responds “Right here?” before firing two shots.

Leftists in Portland later celebrated the brutal murder by dehumanizing Bishop, who was a member of the conservative Patriot Prayer group as a “Nazi”.

A friend of Bishop’s who was with him when he was shot told an interviewer, “They executed my partner.”

He then confirms what is heard on the video – that a conversation took place where the men were identified as Trump supporters and Bishop was shot dead for that reason.

The friend said that immediately after discharging his weapon, the shooter ran away. He still hasn’t been caught by authorities.

“I’m OK, I turn over and Jay’s dead, because he believed something different than them…he’s a good man, he didn’t do anything to earn a bullet in the chest,” said Bishop’s friend.

Asked what his message would be to President Donald Trump, Bishop’s friend said “send troops.”

“Portland is as corrupt as any place you’ve ever seen or heard about in the movies,” said the friend, adding that Patriot Prayer members are being charged with felony rioting while the actual Antifa rioters who throw explosives at police are set free by the District Attorney.

“Those people are being let go,” he concluded.