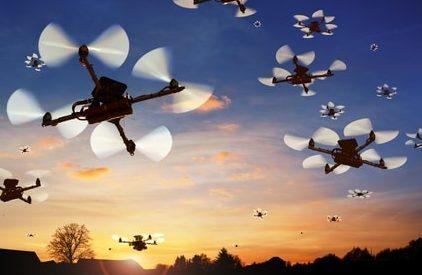 
A new study for the US Air Force argues that a large-scale adversarial drone swarm attack could be classified as a “weapon of mass destruction” (WMD), a term commonly used to describe chemical, biological, or radioactive weapon capable of causing widespread death and destruction, reported Intelligent Aerospace.

Zachary Kallenborn, a senior consultant at ABS Group, specializing in drone swarms, WMD terrorism, and WMD warfare, authored the report for the Air Force Center for Strategic Deterrence Studies at Air University Maxwell Air Force Base in Alabama where he makes the case that some weaponized drone swarm attacks could be viewed as a WMD:

“Drone swarms can also serve in traditional WMD roles. They would be highly effective as mass-casualty weapons, especially against soft targets,” writes Kallenborn.

“They could also be strategic deterrent weapons, though the variety of defenses means nuclear weapons are likely to continue to be more reliable deterrents. Drone swarms could be effective in assassination attempts due to the ability to overwhelm defenses.

However, the lack of stealth means they are likely to only appeal to actors unconcerned with (or desire) their role being known. In some circumstances, drone swarms could function as an-access, area-denial weapons.”

Drone swarming technology, one that is deployed in squadrons, able to autonomously operate in a pack, is the future of warfare on the modern battlefield.

Readers may recall, a rudimentary version of swarming technology made global headlines in 2018 after small drones attacked a Russian military base in Syria.

Back in 2017, artificial-intelligence researcher Stuart Russell presented a video on “Slaughterbots” to the UN Convention on Certain Conventional Weapons. He warned the development of lethal autonomous weapons could easily destabilize society if an attack was seen.

It’s only a matter of time before armed, fully autonomous drone swarms are labeled as WMD because of their ability to inflict highly precise damage on hard and soft targets.